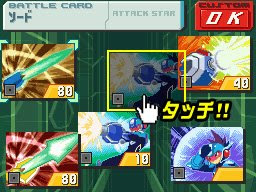 The Wave Station has updated once again, specifically the "System" section.

Details of the "improved" Battle System have come to light. The rules remain pretty much the same as the previous games; you pick Cards of the same type, or in the same column,row.

Mixing it up a bit are the new Support Use and Single Use Cards. Cards that appear in the background of the Custom Screen are capable of either Support or Single use. Selecting a Support Card changes the Card into Cards capable of assistance such as recovery. Single Use Cards are used as they appear.

You can view two flash movies showing the system in use at the links above.

The second update is a new wallpaper starring Acid Ace. Not much, kinda nice to look at.

Also, pre ordering the game gets you those awesome desktop calenders and an exclusive White Card
Posted by Protodude at 7:34 AM