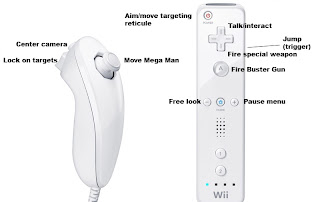 Wiifanboy has written up a lengthy article discussing why MegaMan Legends (Rockman DASH) is ideal series to grace the Wii.

"If Mega Man Legends were to be revived for the Wii (or, better yet, get a sequel), the wonders of the Wii Remote and Nunchuk would make it a far more enjoyable affair in terms of movement and shooting. For starters, a more practical use of the nunchuk's analog stick would move Mega Man around, and the C button could snap the camera behind his back to eliminate the annoyance of running in one direction and looking in another -- standard 3D action/adventure controls. To take the C button's functionality a step further, holding it down could activate strafing, eliminating the need for two independent buttons for strafing left/right. And to fire, there's the Wii Remote; a targeting reticule and free aiming with the Wiimote would do wonders to speed up the combat and make it more fun. In fact, Mega Man Legends would work exceptionally well with a very Metroid Prime 3-esque control setup."

Do you think the Wii is fit to house the Legends/DASH series?

For the rest of the article, head down to Wiifanboy
Posted by Protodude at 11:40 AM