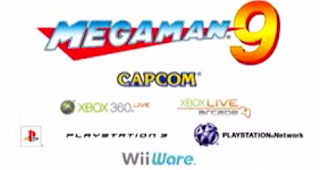 An anonymous source claiming to be a part of the press has come to crush the rumors started by SSJ4 while at the same time, confirming MM9's U.S release: September the 22nd.

"This SSJ4 guy is nothing but a fan pulling your guy's legs. His stuff is pure bull. There is no DLC whatsoever. The only thing close to DLC is a few unlockables gained by completing certain tasks in a "Challenge Screen." (Sorry, I'm not going to touch on this)

I've had Megaman 9 in my office for the past week and have been diligently writing up a review slated to hit online next week. I thought you and your readers would like to know that Capcom of America has specifically stated to not release the review until twenty-four hours AFTER the 22nd. Why? Take a good guess :)

However...I do not know if the 22nd release date applies to all three version of the game. We're only reviewing the WiiWare version, so I guess its safe to assume it's heading in the Wii's direction Monday.

Look forward to Sunday night, Capcom is expected to drop a press release confirming the date."

Why must we be teased? Can't we just have the game now?
Posted by Protodude at 2:00 AM