Reader Psyren recently came into possession of a Mega Man X Command Mission E3 demo, a build of the game originally intended for exhibition purposes. Rather than hogging this rarity all to oneself, Psy has chosen to share the game with the Mega Man community. 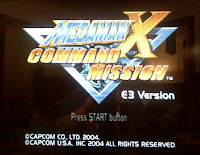 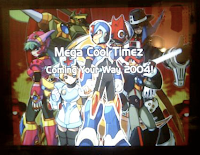 Download the game here! The pack consists of both a RAW version of the ISO and special ESR patched version for use on modded PS2s.
Though I've yet to play it myself, reader Aubrey (who also takes credit for making the game playable) pointed out the following differences:


Despite being an early build of Command Mission, it is, unfortunately, not the much sought after "normal armored X" build from late 2003. Still, this version is pretty neat in its own right.

As for any behind-the-scenes stuff such as unused textures, music and the like, nothing's turn up yet. No one's taken the initiative to scrummage through the game's files so if you've got the capabilities to do so, please let us know if you unearth anything significant!

Enjoy! Thanks again to Psyren, Aubrey and the members of the ASSEMbler Forums Skaarg, crediar and DreamTR.
Posted by Protodude at 5:28 PM