Instead of clogging up the previous post with more updates, I decided to give this one a post of its very own. Coming from the Comics Continuum, here's a sneak peek at the cover artwork for Mega Man issue 1 from Archie Comics, illustrated by Patrick Spaziante (UPDATE: one page preview added thanks to Newsarama) 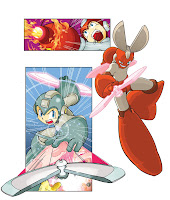 The comics are said to focus on the classic series, with the story being penned by Sonic the Hedgehog veteran Ian Flynn. "Spaz" is confirmed to be illustrating at least issue 1 though it's unknown if he'll be doing subsequent issues.

Issue 1 is set to hit comic book stands in Spring 2011 with new issues being released on a monthly basis. Thanks to being published under the Archie label, it's anticipated the comics will be sold in a wide range of markets and not just comic book stores. This means you'll have an easier time hunting down an issue. No word on subscription services but I suspect we'll be hearing something closer to #1's release.

Credit: The Sonic Stadium
Posted by Protodude at 9:12 PM