Dark Messiah got his hands on the trial version of Operate Shooting Star yesterday, and saw fit to describe his playthrough on his blog:  (Translation provided by The Mega Man Network)

-The opening animation sequence to OSS is similar to BN5DS, combining still images.
-Recovery causes the screen to darken, pausing the battle (as it did originally)
-Long Sword does 100 damage (it only did 80 in the original BN)
-When playing as Star Force MegaMan, you press X to lock on, and hold B for rapid fire. The buster likely will auto-charge.
-Star Force MegaMan’s shield cannot be used repeatedly. 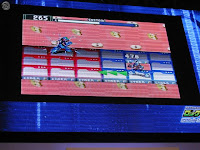 -Aside from the title music, none of the game’s music is arranged so far (but there’s no reason to suspect it won’t be)
-When operating Star Force MegaMan, the music changes to his theme song
-For attacks that pause the game (such as Navi chips), damage is calculated as the attacks progress, as opposed to being calculated after the screen undarkens

-The degree of difficulty for minigames during scenarios has been adjusted


Frantic fighting in the Star Colosseum 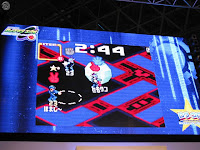 -Details on the MegaMan Star Colosseum: Players are divided into two teams and compete for stars. You select your player and desired rock-paper-scissors attribute. For opponents whose rock-paper-scissors icon is weak to yours, you can attack them with A to steal their stars. You can also touch your allies to give them stars. There are items on the field to change your rock-paper-scissors attribute, as well as other items such as bombs, pitfalls, and speed-up ability. These are activated with B. You can lose items by being attacked. The map also has gimmicks such as vanishing platforms. At the end of the game, it announces which team is victorious by catching the most stars, and then shows individual stats.