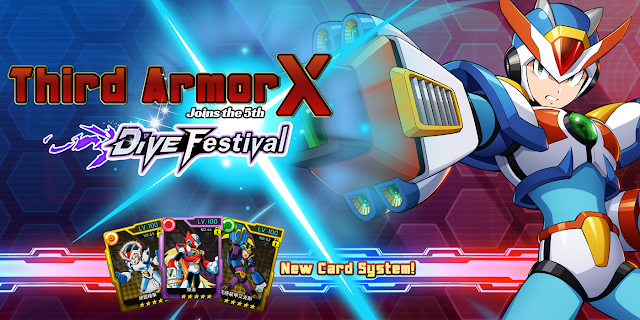 Taking the spotlight for the 5th DiVE Festival, a fan-favorite X armor has finally arrived to Rockman X DiVE! But that's not all! The new cards system makes its debut this week, too. Check all the info after the break!
First let's start with Third Armor X's active and passive skills. He is a limited character and is available today through October 21 at 15:59  (UTC +8). 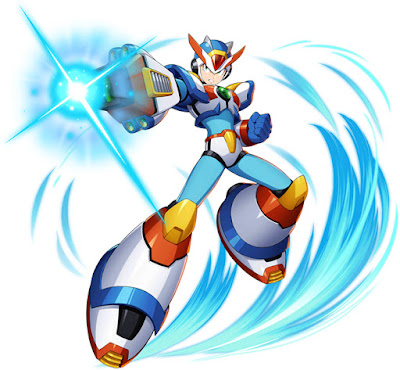 Shoot an energy round to inflict 11.88% attack damage to the target. Can be charged to unleash a more powerful energy round. Once the maximum charge is reached, X will unleash two charged shots with both hands. When the two shots connect, the first energy shot will spread, dealing 6 damage while the second shot will be enhanced to deal up to 26.2x damage.

Tap into the potential power of Third Armor X and gain increased attack and increased defense status that cannot be cancelled.

Accelerate Charge: The time required to reach maximum charge is reduced by 25%.

Body Chip: Chance to acquire a shield that can withstand 50% attack damage.

Head Chip: When you stay still, recover HP equal to 17.5% of attack damage per 7 seconds.

Buster Mastery: Increase damage by 20% when equipping a buster.

Body Chip Enhancement: Enhance the effects of Body Chip by increasing the damage that the shield can withstand to 75% attack damage.

The "Hunter Token Lucky Roulette" starts today and lasts until October 20 at 23:59 (UTC+8). It's the usual stuff: you spin the roulette to get rewards, you can get 300 tokens daily and each spin cost 50 tokens. Nothing out of the ordinary when it comes to the rewards, I'm afraid. There's EM, Zenny, Proficient Memory Cards among other things

When it comes to the Arena Mode, some changes have been made. First, Season 7 of Ranked Match is finally live after some delay and will end on November 13 at 22:00 (UTC+8).

Second, all the Arena Modes yield new rewards related to the card system. These are "Card packs" to obtain cards and "Universal Star UP Cards" to rank up your cards. On top of that, we can get Arena Tokens to spend in the newly open Arena Token Shop.

You can see the items below. 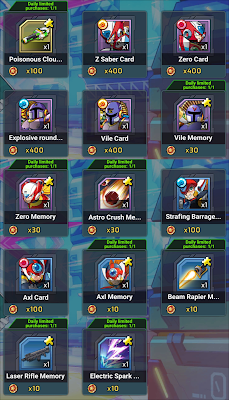 The amount of victories and matches you need to play to get the Arena rewards have been reduced. For example, daily rewards no longer need 5 wins; one is enough.

Co-op Mode has also its own Token currency and respective shop. Now you can get Co-op Tokens on a daily basis by playing each level, but only if you play them in the new Challenge Mode with another player. It cannot to be done alone. What's more, you can get "Powerup Resource Pack” that contain EXP Programs and random crystals to craft cards by playing each co-op level. Crystals will appear in the "Powerup Resource Packs” only when you play level 60 stages and above.

Below you can see the Co-op store items . 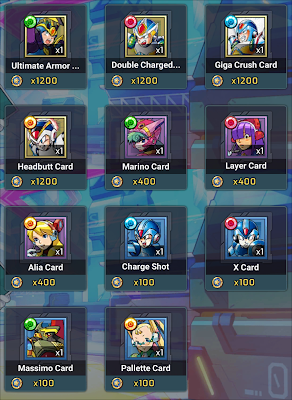 You probably don't want me to write 1000 words about how it works, so the best thing you can do is first read the tutorial from the official website and then experience it yourself.

But basically, each character can be equipped with 3 cards, with the third slot only available to characters with a 4 star rank. Cards will raise your characters stats and your player overall power. Some of them have unique passive skills to improve certain characters skills or general skills.

A few cards can be crafted in the lab, while others can be bought from the Arena and Co-op shop. Of course, you can get more by playing the Arena Mode. You will also get a couple of packs thanks to the login bonus event, the first being the S rank card for "RiCO".

Let us now what do you think about the card system in the comments!