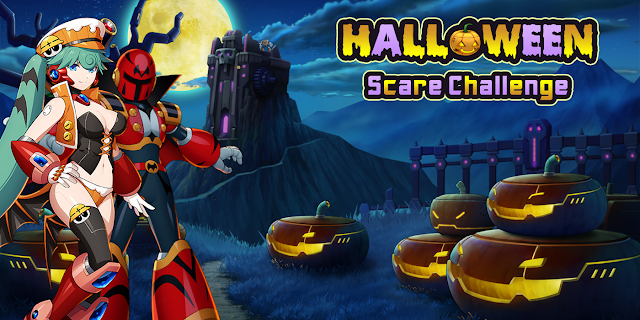 Trick Or Treat! The Halloween event is here! It includes two new characters, a brand-new stage, a new weapon, and a fantastic remix of Dark Man's stage theme. Check out all the info after the break!

Let's start with the characters for the first week of the Halloween event: "Halloween Vile" and "Halloween Marino". Both are available now through the Halloween gacha banner which also comes with the saber weapon "Ancient Relic". The banner is available until November 11 at 15:59 (UTC+8). 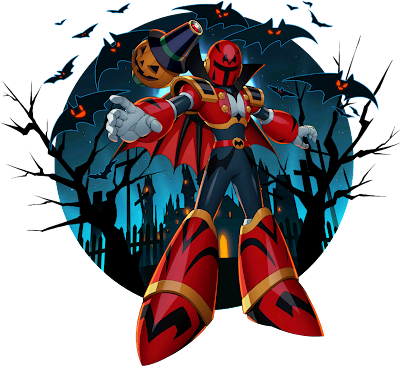 Launch a batwing-shaped boomerang at the target to cause 220% damage, with a chance to recover HP. The boomerang will stay in place for a little while after hitting its target or reaching its maximum range before it disappears.

Summon a pumpkin bomb that will automatically seek and track a target. The pumpkin bomb will explode when it contacts its target, when it is attacked or after 6 seconds have past to damage all targets in range and reduce their defense.

Vampiric Change: When you hit a target with reduced defense, your movement speed will increase by 25%.

Launcher Mastery: Increase damage by 20% when equipping a launcher.

Jack O' Lantern: Release a Pumpkin Bomb when you use Batwing Boomerang. 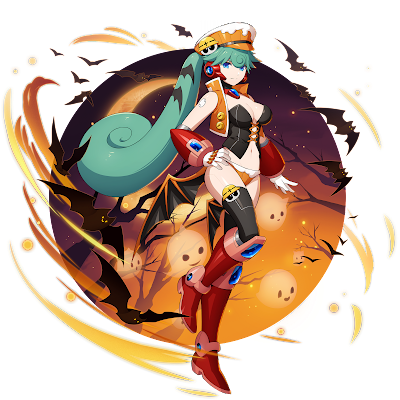 Charge at your target with a flying kick that causes damage equal to 200% of your attack.

Shoot a kunai at the target cause damage equal to 0% of your attack. You will be able to use Scattering to teleport to the location of the target and cause damage and Immobilization to the target. The teleportation effect is only effective to the player and if no marked target is available, the skill will be activated at your character's location.

Slow Resistance: 40% chance to become immune to the effects of Slow; the same type of chance can be stacked.

Little Devil Change: Gain Enhanced CRI once every 6 seconds by 10.5%. This can be stacked up to 10 levels.

Mobility: The preparation time of the Scattering is reduced by 20%.

Restriction Off: When you hit a target with Phantom Kick, you will be able to use Phantom Kick immediately again. This effect can only be triggered once more after 8 seconds.

Devil's Whisper: Reduce the activation time for Little Devil Change by 30% and increase the number of stacks by 3.

Upon login into the game the first thing you will see is the special Halloween login bonus screen which gives you EM and boxes for two weeks.

Next is the "Halloween Scare Challenge" or the Halloween event stage, if you prefer. It's a haunted castle full of bats, mummies and all the fauna you expect for this kind of event. And of course you will be welcomed with deadly traps and appearing blocks while creepy eyes stare at you from inside the castle walls.

At the top of the castle awaits none other than Dark Man. If you ask me je's not the most appropriate boss for this event. But beggars can't be choosers.

Overall the stage is well designed and they have done a great job transforming stage enemies into Halloween fauna, special mention to the Frankenstein ride armor. And speaking of doing a great job, they finally we got rid of Wood Man's theme. This stage comes packed not only with a fantastic remix of Dark Man's stage theme, but a version of the boss theme from Rockman 5 that was used in Rockman World 4. Talk about going the extra mile! It's the best version of the theme, in my opinion. 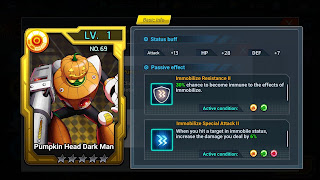 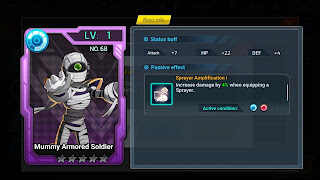 As usual, the goal of the stage is to get points to exchange for rewards. The characters and weapon from the Halloween banner are the ones that give you most bonus points, as expected. However, you can use regular Vile, Marino and the Gatlin Gun to get +20 points. Check the in-game rules to find out the other weapons and characters you can use.
The rewards are divided in two tiers, "point rewards" and "ranking rewards". In "point rewards" you can get up to 6 Mummy Armored Soldier cards and one Pumpkin Head Dark Man card, plus some card packs, card EXP programs, Halloween Chests and the usual items like EM, Zenny, skill points and so on.
In "ranking rewards" where you compete against other players to see who ranks the highest, you can get numerous Pumpkin Head Dark Man cards and even Universal Star Up Card III to rank your S rank cards. You can see the full list of rewards below.

In case you don't play the game, you can listen to the Dark Man Stage -Halloween Remix- track below.

In the current event tab we have two new events: Conquer the Brambled Castle and Castle x Ghost x Halloween.

This event is similar to the hunter roulette, you get one lucky draw ticket by doing daily missions like "complete race mode 1 time", "complete co-op 1 time", "complete one level of the Jakob Orbital Elevator (challenge difficulty) and "defeat 100 enemies". 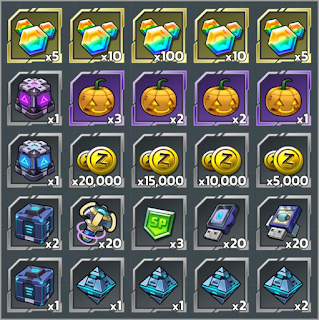 Every time you use one lucky draw ticket, you will get one random item from the list you can see above. When you claim all the rewards is game over until the next phase start which is directly linked to the next event.

This event pretty much consists of having you use lucky draw tickets in the Conquer the Brambled Castle event. When you use 18 tickets, you will get "Halloween Surprise Box x 40".
Next Wednesday Conquer the Brambled Castle will be replaced by the event Fight the Pumpkin Head Dark Man which works exactly the same and on November 11 the event will change again to Purify the Ghosts.
So basically by using 18 lucky draw tickets in each of this three events you will get a total of 120 Halloween Surprise Boxes, 40 for each event. What's more, if you complete the three, you will get 10 memories of "Ancient Relic", "Halloween Vile" and "Halloween Marino".
The development team has added the “Automatic Proficiency Conversion" function and some new items to the in-game shop which you can check here.
And that's all for the first week! If you ask me, a Halloween event without a witch is not a Halloween event, so I'm looking forward to see what happens next week!
Let's us know what you think of the event so far in the comments!
Posted by Reploid21XX at 5:33 PM