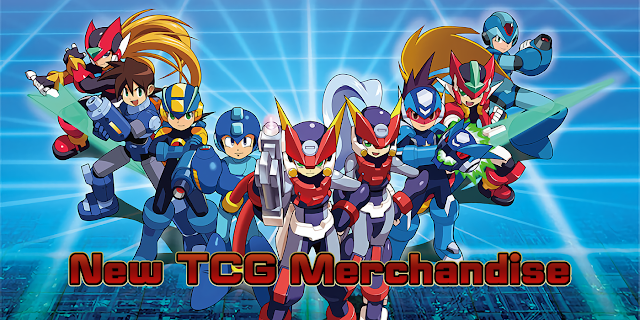 Once again Broccoli are releasing a bacth of Rockman-themed merchandise for those who play trading card games. There's rubber mats, card sleeves and card boxes to store you favorite trading card games in. Find all the info after the break!
Broccoli have been distributing these kind of items since 2018 when they started selling Rockman Classic Series and EXE Series card sleeves, mats and boxes. From there, they moved on to pretty much all the other series... barring Legends and Star Force. Now they're back with some really interesting artwork choices for items due this December.

First we have three rubber mats due on December 26 for 3,300 yen each, or roughly 27€ or $31. The size is approximately 520 x 370 x 2mm. They weigh 250 grams.
The first one called "Victory" uses one of the commemorative illustrations released during the Rockman 20th Anniversary (with a different background). Next we have "Roll!, Roll!, Roll!" which was used by Kotobukiya in 2011 on a mug and a jigsaw puzzle. And last, we have "Iris" which uses artwork from the X-Challenge score screen from the Rockman X Anniversary Collection.

Next we have four types of card sleeves. Each pack comes with 80 sleeves and they are made of polyethylene. They measure 67 x 92mm and are due December 19 for 990 yen each, around 8€ or $9.5.
The first two were released previously as a free wallpaper on the Rockman Unity App. We already talked about Iris and the artwork for Black Zero was first seen in Rockman Xover.