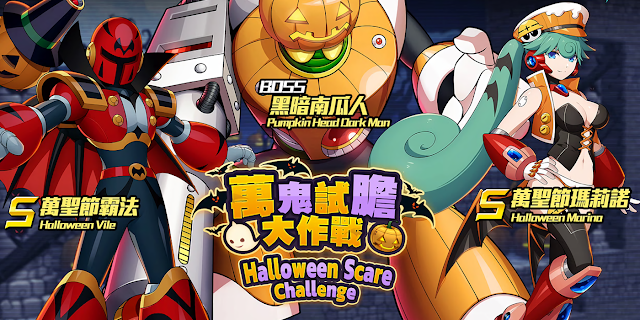 Seven months after the release of Rockman X DiVE in Taiwan and a few Asian countries, the game finally arrived to one of the franchise's key markets: Japan. What's more, the trailer detailing the Halloween event has been released and the second Halloween character was revealed, too. You can find that and much more after the break!

As revealed before, "Halloween Vile" is the first character of the event and "Pumpkin Head Dark Man" the boss.

"Halloween Vile" active skills are the Batwing Boomerang which launches a batwing-shaped boomerang to cause damage and has the chance to recover HP. The other is Pumpkin Bomb which summons a pumpkin bomb that will automatically seek and track a target.

And now, thanks to the trailer, we know that the second character is "Halloween Marino". Her skills are the Phantom Kick which charges at your target with a flying kick and Scattering which shoots a kunai at the target and allows you to teleport to the location of the target.

With this banner, a new S rank saber will be available, "Ancient Relic" which looks to be an homage to Sword Man's sword from the Classic Series. 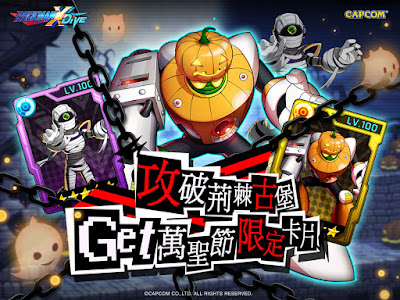 Via this event we will be able to get two new cards: Pumpkin Head Dark Man and Mummy Armored Soldier.

Typical of these kind of events, we will be grabbing a unique item throughout the stage. This time its candy. And fortunately we don't have to listen to Wood Man's theme again - the development team has prepared a spooky remix of Dark Man's theme!

To celebrate the launch of the game in Japan, a new gacha banner is available now until November 4 at 15:59 (UTC+8).
The banner has previous DiVE Fest limited characters, sadly the drop rate for each banner character is 0.250%. IS up to you if you want to try your luck!
As part of the celebration every player will be getting in their in-game mail box the following items:

The first collaboration Rockman X DiVE is doing in Japan is with the manga Hi Score Girl, written and illustrated by Rensuke Oshikiri. If you have good memory, you may recall an illustration for Rockman's 30th Anniversary.

You can read the crossover manga here.

Lastly, Famitsu had the chance to interview Reina Ueda, RiCO's voice actress in the 11/5 issue. Thanks to our friend Mega Man Tune-a-Day, we can bring you the translation of said interview.

Famitsu: Tell us how you felt when you got the role of Rico.

Ueda: I was incredibly happy and also shocked to be entrusted the role of the navigator of such a well known series. And since Rico's voice is the first one you hear when you start the game, I wanted to do my best to make it a positive listening experience.

F: What was your first impression of Rico?

U: The first time I looked at her illustration, I got the impression she was straight forward and responsible. But when I was reading her script, I realized she's actually very cheerful and lively. I was moved by how different she was from my expectation!

F: Is there anything you're considerate of when you perform as Rico?

U: She has a very bright and energetic disposition, so whether she's celebrating or down in the dumps I give it my all! I tried my hardest to always maintain a positive atmosphere.

F: What impression has Rico's lines left with you?

U: When she refers to the player as "player." I've never addressed anyone that way and it was a bit different, so it really stood out to me.

F: Is there a character you particularly like in X Dive?

U: As it's the first Hunter Program Rico summons in the game, and of course because it's Rockman!, X is is incredibly memorable. Even the sight of him really brings me back to my childhood.

F: X Dive is largely an action game. Are you very good at action games?

U: I'm not really that good at action games, haha. Most often I'm playing an easy going, chill game.

F: Please give us a message for the Famitsu readers looking forward to the release of Rockman X Dive!

U: The game will be available soon. Rico will be supporting you in all kinds of scenes in the game, so whether you've been experiencing it already or are brand new to it, come join us as we adventure in the world of Rockman X Dive!

And that's all for today, let us know what do you think of the Halloween costumes in the comments!