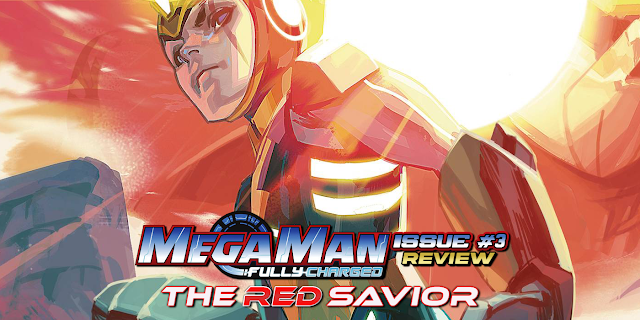 The stakes were high after issue #2's cliffhanger and the doubts in Aki's mind were even bigger. We had an idea where the creative team could take the story in this issue... but they decided to throw a curve ball at readers instead!
Something or, rather, someone you didn't see coming took center stage here. You don't want to miss it! Read on for my review!
This review contains SPOILERS from beginning to end. I recommend you to stop reading if you have any intention to purchase the comic or read it in full at some point. Trust me, this issue is one you want to enjoy having the least information possible. 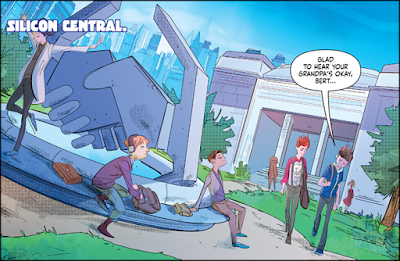 The book starts with Aki and Bert walking through the Silicon Central campus, talking about Bert's grandpa's well-being after the terrorist attack perpetrated against him during his lecture at Silicon University. Bert confesses to Aki that his grandpa, Dr. Wily, is his hero; the reason why he is into robotics and how he got first place in the science-fair. All thanks to grandpa Wily.

A few minutes later, the pair are stopped by Principal 100100 to remind them to stay out of trouble. Suddenly, Aki's software is hacked by "Daini", who tells him to rendezvous at the Trumbull Street Station.

The station was abandoned years ago and the pair have no trouble picking a transport to the Badlands where Daini shows Mega Man one of the Hard Age battle sites. Mega Man learns first-hand the horror of the Hard Age and how Dr. Light created him and Daini as the ultimate weapon to fight their own kind. 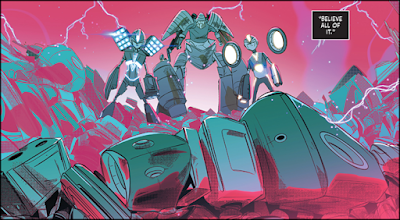 Just as denial sets in, Mega Man has another flashback to the Hard Age where he seems himself, Daini and Dr. Light (who is riding an exoskeleton) with thousands of defeated robots at their feet. The brothers leave the battle site with Daini asking Mega Man if he will continue to be a hero for the humans or a weapon pointed in the right direction.

Back at Dr. Light's lab, Mega Man has made his decision. He takes up Wily's offer to upgrade him and  takes the injured Mega Mini with him. Suna Light spots Mega Man leaving the lab and questions his intentions... but Mega Man is not up for a lecture about what's right or wrong. Mega Man leaves the scenes leaving Suna behind. 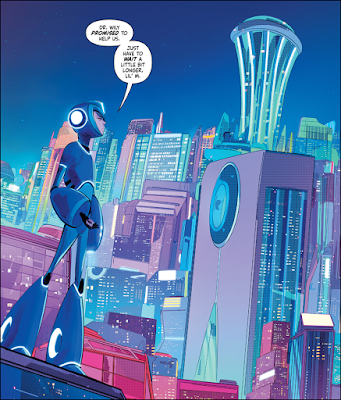 At the top of skyscraper in Silicon City, Mega Man is determined to do whatever it takes to save Mega Mini and defeat the Robot Masters.

Mega Man arrives at Wily's state-of-art lab for the promised upgrade but he still has doubts. Wily is a savvy man and wastes no time to convincee Mega Man: "If not for you, do it for him (Mega Mini)". Wily initiates X protocol to upgrade Mega Man. Some time later, Mega Man wakes up to find out that Mega Mini is back and completely recovered. 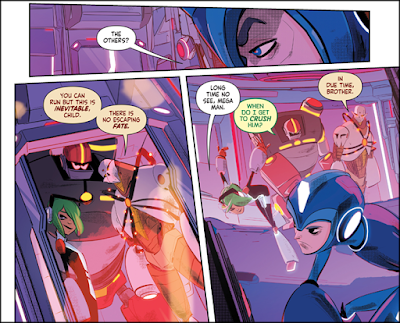 The happy reunion doesn't last long.The security system is buzzing and an explosion flings Wily to the other side of the room. Skull Man and the Robot Masters are here. Wily escapes using a hatch in the floor while Mega Man confronts Skull Man, Chaotique, Blasto Woman and Gusts Man.

Mega Man has no chance again them. Desperately, he asks Mega Mini to pull out the big guns but Mega Mini warns him that activating the Fully Charged mode will burn him out. The only chance is to escape using the stairs. Mega Man is surrounded and his escape attempt fails with Skull Man kicking him down the stairs.

When all seems lost, a capsule blasts onto the scene, knocking down Mega Man's enemies. 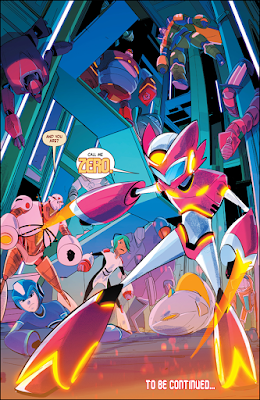 ZERO has arrived! To be continued...

The creative team for issue #3 is pretty much the same as it was in issue #2, with the exception of the A.J. Marchisello returning as writer. As usual, Stefano Simeone is at the pencils, Igor Monti on coloring duties and Ed Dukeshire on lettering.

In a word, there work on this issue was excellent. The writing is solid and keeps the overall story interesting. The lettering is appropriate and coloring is stunning as always... but the MVP here goes to Stefano Simeone. Simeone's full page illustrations, the intricate design of Mega Man's schematics when he is being upgraded and of course, for Zero's design, really knocked it out of the park.

Talking about the issue itself, where do I even start? I guess from the end rather than the beginning as it was the highlight of the issue and something I didn't see coming.

Not in a million years was I expecting Zero to be the one coming to Mega Man's aid. I was expecting Daini at best, but a character from an entirely different series when Fully Charged has been nothing but a new take on the classic series? No way.

I really like Zero's design and the fact that it's its own thing while keeping some trademarks from the Zero we all know. Just like most character that appear in the comic, Zero is extremely stylized, but he looks cool with the blade arms and the helmet visor, not to mention his armor's black lines and neon lights.

As for the rest of the comic, I really liked that little moment of character building when Daini is taking care of his own kind, feeding the scavengers in the Badlands. Another thing that drew my attention was when Wily was upgrading Mega Man and said: "initiate X protocol". Does it hold any significance or is just a cool sounding phrase?

After reading this issue, there are a lot of questions to be answered and I can't wait to get issue #4 in my hands. 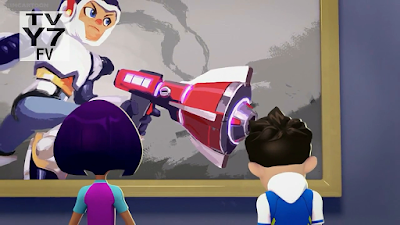 As a side note before we finish, I'd like to point out that we had plenty of easter eggs from the X Series in episode 8 of the animated series. While they don't necessarily mean anything, I think is worth mentioning that at least the weapon X is holding in his hand has relevance in the story of Fully Charged, even if X in the picture looks like a genuine easter egg.

Let's us know what you thought of this issue and Zero's surprising appearance in the comments!