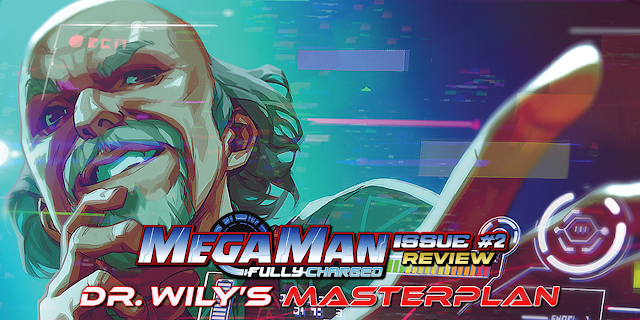 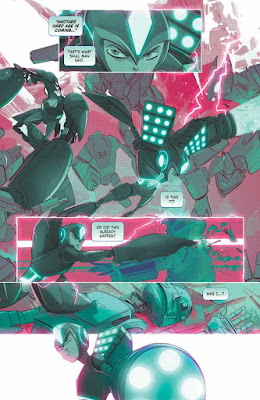 The story of issue #2 starts in the middle of the night with Aki dreaming and having another flashback from the Hard Age. Aki later confronts Dr. Light seeking answers, but the good doctor only gives him the cold shoulder, just as Suna predicted in the previous issue.

The next day, Aki and Suna attend a lecture about the Hard Age in Silicon City University. The speaker is none other than Dr. Wily (Bert Wily's grandpa). However, the lecture comes to an abrupt halt after a sudden explosion behind the lectern. It's a terrorist attack orchestrated by Skull Man!

Nobody gets hurt but Aki and Suna lose their chance to have a vis-à-vis with Dr. Wily. Aki impatiently ignores Suna's recommendation to postpone the conversation until things calm own. Instead, he decides to do things his way -- the Mega Man way.

Later in the night, Mega Man sneaks into Dr. Wily's backyard but he is stopped by Wily's security system. Due to the absence of Mega Mini -- who was hurt in the fight with Skull Man in the previous issue, currently undergoing repairs -- Mega Man is having a hard time defending himself. He can't dodge nor aim properly at the lasers pointing right at him. 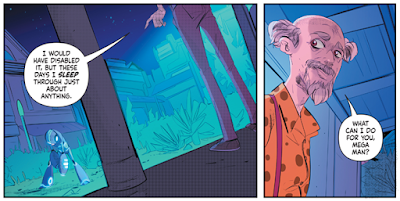 After Mega Man destroys two surveillance turrets, Dr. Wily shows up and invites him inside for a chat.

During the conversation, Dr. Wily reveals that Dr. Light was called "Bot's Bane" during the Hard Age. Wily then offers his services to Mega Man, recognizing that his robot-kind are the superior "species" over mankind, destined to rule the planet.

Dr. Wily's intentions are to manipulate Mega Man and place him in Skull Man's position as the leader of the Robot Revolution. Wily even offers to upgrade his systems, but Mega Man leaves the scene full of doubt. It appears that Dr. Wily seems to believe more in Mega Man than his own father does. 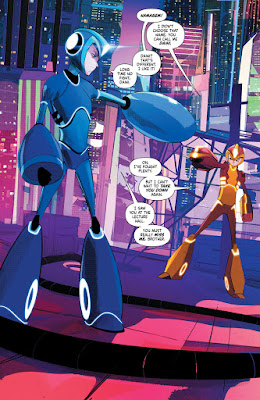 On his way back home, Mega Man bumps into Namagem on the rooftops of Silicon City's skyscrapers. Here, it's revealed that Namagem never chose that name himself and wants to be called "Daini".

Mega Man confronts Namagem as he saw him previously in the crowd that was attending Dr. Wily's lecture. The small skirmish ends with Mega Man losing and having to tell Namagem about his meeting with Dr. Wily and his own doubts.

Namagem agrees with Dr. Wily view. A war is indeed coming and this time, Namagem embarks on his own, recognizing that he chose the wrong side in the past when Lord Obsidian kidnapped, brainwashed and tortured him. The brothers depart but not before Namagem encourages Mega Man to work alone and turn down Dr. Wily's offer.

Back at Dr. Light's lab, in front of a pod where Mega Mini is recovering, Mega Man questions if he is "the one to lead the robots into the future". 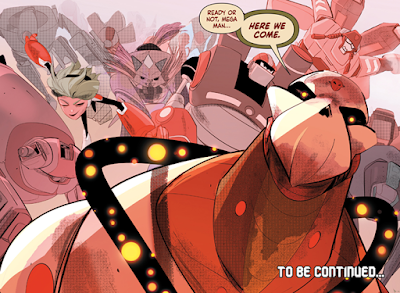 We are then transported to Skull Man's army camp were he is rallying the troops to "destabilize the false utopia that is Silicon City... Expose its hollow symbols of harmony between man and machine".

Skull Man and his army are about to march on Silicon City and Mega Man is in their sight.

The creative team for issue #2 is pretty much the same as in issue #1. Stefano Simeone at the pencils, Igor Monti on coloring duties and Ed Dukeshire doing the lettering. The only difference is that A.J. Marchisello is no longer co-writing the book with Marcus Rinehart. That duty falls solely on Rinehart's hands this time.

I think it's fair to say that the best, or at least the most significant part of this issue is the introduction of Dr. Wily for the first time in the Fully Charged continuity to readers. I think they have done a great job and this version of Dr. Wily is probably the one with the most depth and character yet. He presents himself as a loyal servant of robotkind, but you can see his mind plotting and scheming with every word spoken to Mega Man.

The writing in this issue is excellent and continues the setup for what might be a big confrontation between Aki and Dr. Light in future issues. The book does a fantastic job not only introducing Dr. Wily but fleshing out Aki's struggles and search for identity as well.

Mega Man's brother Namagem has a stellar appearance in this issue. While he continues to play the role of the "rival", he impart wise advice to Aki: don't trust Dr. Wily. Will Aki listen? Probably not... otherwise, where is the drama?

And finally we have Skull Man's army which had a new recruit in this issue: Chaotique. Personally, I felt like this is the weakest part of the comic so far. I really don't care that much for Skull Man and his revolution, but that may change by the next issue when they will be marching on towards Silicon City. We can expect to see them more and, perhaps, get some additional character development.

When it comes to the art, after two issues I think I've come to terms with Stefano Simeone's style. Although his extremely stylized designs are still odd to my eye, I think he has done a great job. This issue has two moments of action, one when Mega Man sneaks into Dr. Wily's backyard and another when Mega Man and Namagem fight on the rooftops. Both scenes are very dynamic, easy to follow and offer some pretty interesting "camera angles". The detailed backgrounds are a nice touch, too.

Simeone's take on Dr. Wily's design is also very fitting for this universe and I wholeheartedly approve it!

As for the coloring done by Igor Manti, it's pretty much impeccable, special mention to the few pages where Mega Man and Namagem fight and the attention to detail coloring the buildings.

If you had the chance to read this issue, let us know your opinion in the comments!
Posted by Reploid21XX at 10:04 PM