Capcom Japan has uploaded a handful of photos from last week's Tokyo Game Show, including some pictures of Operate Shooting Star related events and booths. 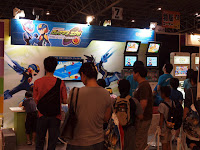 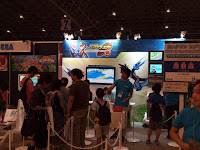 As you can see, OSS had a very small presence at TGS, limited to a single booth at the "Kid's Corner".
The photo on the right indicates that there was a 15 minute wait to play the demo. [More OSS booth photos, here] 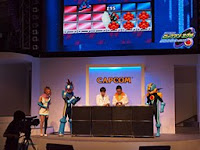 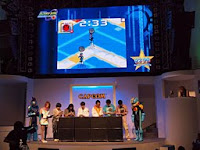 Above, the Operate Shooting Star special stage event.  "Mr. Famous" was joined by his faithful assistant to demo a versus match between Rockman.EXE and Shooting Star Rockman.  Shortly afterwards, members of the press were invited to play the "Rockman Colosseum" multiplayer mode. 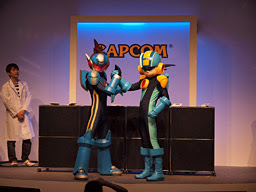 The stage event ended with RMEXE and SSR joining hands, striking a pose reminiscent of a certain piece of promotional artwork.

For more photos of Capcom related booths and events, head on over to the company's official TGS hub here.
Posted by Protodude at 11:08 AM