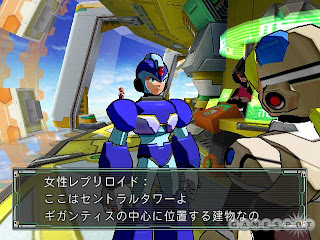 Yesterday, I received word of an interesting discussion going on at the infamous Japanese board, 2chan. 2chan users are claiming that a former Capcom of Japan employee has leaked a beta build of Rockman X Command Mission onto the internet.

The beta build is described to be significantly different than the retail version:

-An "armorless" X (as seen on the right)
-No music, various unheard sound effects
-A "trimmed" plot
-The absence of Marino, Cinnamon, Massimo and Spider
-Bosses appear in unusual locations
-A different logo on the title screen written entirely in kanji/katakana
-Same group of enemies in every battle
-X, Zero and Axl have different "Final Strikes." X's is described to be a "fire" based Charged Shot.
-There is no customization of abilities whatsoever
-The game is approximately two hours in length
-File size is said to be 393MB in PS2 format
-Compressed in a Torrent

The 2chan topic has disappeared since its conception yesterday, so this is pretty much all the info my source was able to get. I personally looked around the net for the supposed leaked beta build, but I've yet to discover where it's hiding.

Until such a file can be found, I'm classifying this as a rumor.
Posted by Protodude at 2:15 AM