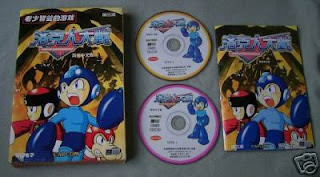 The incredibly rare PC game, "Rockman Strategy" has resurfaced on ebay once again, going for a whopping $129.99 (not including shipping!) The auction comes complete with box, manual and discs.

For the uninformed, Rockman Strategy (aka "The Rockman War") is a Taiwanese PC game officially licensed by Capcom in 2001. For many years, it was believed the game was nothing more than cheap knock-off, but it was later discovered it was indeed official, licensed under the "Dreams Come True Brand."
Posted by Protodude at 3:07 PM