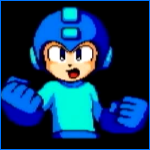 Ahh, it's been a while since we've had ourselves a good rumor!

Minutes ago, I received a tip from "C2" claiming to have a plethora of Capcom E3 announcements in hand. One announcement was the official US release date for MegaMan9: Monday, August 18th.

It's been suggested that MM9 and RM9 would see a simultaneous release sometime in the fall, but C2's "sheets" say otherwise.

There was no mention of MM1 or 2's Virtual Console release.

We'll most likely find out if the rumors are true tomorrow.
Posted by Protodude at 9:45 PM