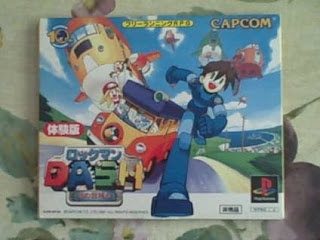 I am happy. Extremely happy. Today, my mail man delivered a small package. Inside was my prized item that I have searched eight years for: the Rockman DASH beta in its entirety. Packaging, disc, everything. All of it right before my eyes. Within moments, it became the holy grail of my collection.


But, why all the fuss? What's the big deal behind the demo build of the game? First and foremost, the demo contains a vast amount of differences from the final retail version, specifically in the graphics and audio department. (Witness most of the differences for yourself)

Secondly, this specific version of the demo is,  one of the most rarest and sought after Rockman items. The beta build was only given out to new members of the now defunct "Capcom Friendly Club" who joined the club at the right time. Thus, it is rumored that only ten to fifteen copies exist.

So yes, I am quite happy. However, I wish to spread my happiness to those who have searched high and low for the beta as well. Therefore, I am considering publicly releasing a .iso of the beta to Rockman community. However, I currently lack the tools necessary to successfully rip the disc's image, so it will take some time.

In the meantime, here is the disc's specs. Searching for the specs may lead you to an already existing .iso of the game:

UPDATE: For a great walkthrough of the beta and all its differences, head down to MegaMan Legends Station's guide and PRC's previous look at the beta
Posted by Protodude at 12:39 PM