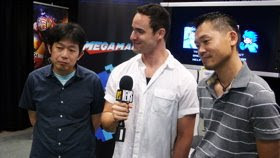 MTV Multiplayer had a chance to interview Keiji Inafune regarding the anticipated Rockman 9/MegaMan 9. The interview covered much of what we already know about the title, but there were a couple of points that caught my eye:

Multiplayer: And I heard someone suggest that “Mega Man 10″ should be a 16-bit game. What do you guys think of that?

Inafune: Well first we have to see how fans react to seeing “Mega Man” in the 8-bit version first. We think this is where “Mega Man” really belongs and we really wanted to go in this direction for any possible follow-ups to “Mega Man.” But once we gauge fans’ reactions and what they have to say, maybe we’ll see another version “Mega Man” in the 16-bit form. For now, we’d like to see how he does in his classic form.

Inafune: Well, there are a lot of “Mega Man” games. But most of them are what fans have requested of us. And we try to make follow-ups to the games that fans request. I mean, I’ve been involved with “Mega Man’ for over 20 years now, and there are games that even I forgot that I had made. When you think of it in those terms, yes, there might be a lot of “Mega Man” games. But it’s a franchise that the fans love.

I'm all for an 8bit RM9, however if follow ups continue this 8bit trend, how long will our enthusiasm last? Surely I'm not the only one who wants to see a new 16bit or 32bit Rockman title.