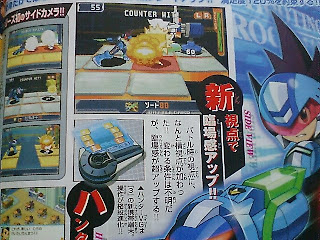 No scans at the moment, but COCOROGs blog contains an abundant amount of info from the latest Coro Coro.

Transformations in this game are referred to as "Noise Changes" and are described as mutations that are allowed by attaining a certain level of Noise and are the result of Noisy Waves coming from Meteor G (a giant meteor headed toward earth). When the level of Noise decreases, Rockman will automatically revert to lower level forms during battle. So far, there is a mention of Noise Changes based on a large amount of FM Seijin from the first game.

-Ox Noise is described as a fire-based form that will boast high attack power and use of the fire element.
-Libra Noise is described to make use of a fusion of fire and water and will also boast high defense properties.
-Cygnus Noise will grant high speed as well as wings, which will likely grant Float Shoes.
-Ophiuchus Noise uses the power of poison and snakes and is labeled as the strategic form.
-Gemini Noise a powerful form that makes use of electricity and probably boasts extra special abilities regarding Battle Cards, such as Side Select. 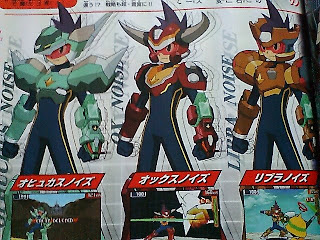 It is mentioned in the report that Subaru will have a new catchphrase when performing Denpa Henkan and becoming Rockman. He will now say "Trans Code! Shooting Star Rockman!".

Not totally confirmed, but it seems there is a mention of the side camera view that we all love from the EXE series? Let's keep our fingers crossed. 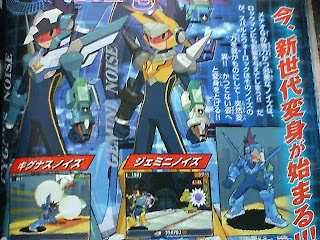 There is also a new Mega Card with an attack power of 100 that features War Rock cutting and tearing through enemies.

The threat in this game appears to be a large meteor headed on a crash collision with Earth, referred to as Meteor G.

A character referred to as Spade Magnets will appear in this game. He is described to be a a Wizard, originally meant to help people, but he has become corrupted by Noise radiating from Meteor G. Sounds like a first boss.


RnR3 is sure sounding better and better. Stay tuned for scans.
Posted by Protodude at 3:18 PM