Megamix Vol. 3 Up For Pre-order 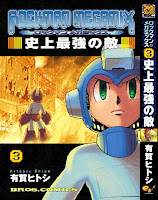 According to Amazon.com, Mega Man Megamix volume 3 is slated to ship out on August 13th -- a mere three months after the planned May 14th release of volume 2.  Given the fact that Udon's recent MM books have seen their fair share of delays and bumps, this release date is most likely subject to change.

And don't forget, Megamix volume 1 is just around the corner. UDON's Matt Moylan previously informed us that vol. 1 will release on February 24th wherever comics are sold -- that's only a few weeks away!
Posted by Protodude at 12:29 PM