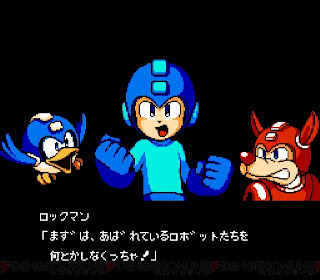 “SSJ4”, an individual claiming to have played the final version of Rockman 9, has requested I post up some tidbits on the blog. Be forewarned, I don't know how trusting this source is, but the tidbits sound awfully convincing.

Downloadable Content
"-DLC is intact for all three versions (Wii,XBLA,PSN).

-Access to DLC is on the Boss Select screen, bottom right corner.

-Capcom plans to upload new content every so often. Possibility DLC won't be available until two to three weeks after the game releases. (speaking of the game's release, Wii users can look forward towards the 22nd of this month...although they've discussed delaying it till the following week due to a BIG Virtual Console title that might take the attention away from RM9)

+Shooting Star Rockman: Rockman from the Shooting Star series is a playable character. Once downloaded, you can equip him in the Costume menu. (Japan only) +Remixed Music: Download remixed BGMs, replaces 8-bit music.

+Blues: Yes, Blues is playable. Has his own set of moves/attacks. (Actually, he kinda sucks. Controls to loosely.)

+Auto messages: At some point in the game, Auto converses with Rock. This download changes what he talks about. One message featured Auto giving Rock his horoscope .

-DLC may or may not be “free.” Capcom is considering options to make DLC redeemable. Wants to reward players for hard work. -Plans a years worth of DLC.

Miscellaneous:
-RM9 was developed on Wii hardware, exclusive to Wii in Japan. XBLA Achievement are Capcom USA's doing. Not worth your time.

-RM9 was concieved as a brand new series, started out as a pet project at Inti.

-I've been told Capcom was fiddling around with two Rockman Wii titles prior to RM9's development, both have been shelved. Hiatus. (Scramble Battle?)

-RM9would not have existed without fan support. Future RM9 like titles will be fueled by fan support.

-XBLA and PS3 versions felt like rushed ports of Wii version. Actually, they are merely ports. No touch ups."

I find the Septmember 22nd release to be highly convincing, especially since this happened hours ago at GoNintendo:

"KingBroly tells us that in the latest Nintendo Voice Chat Podcast, the gang is talking about their embargoed Mega Man 9 review. Apparently, they cannot post it up until September 22nd. Hmmm...that lines up with a Monday perfectly!"

I should mention, SSJ4 contacted me this past Friday, requesting to post this up on Tuesday (today). Why? I don't know, tipsters can be weird like that.

Regardless...don't get your hopes up! Keep an open mind and we'll see what happens.
Posted by Protodude at 2:00 AM