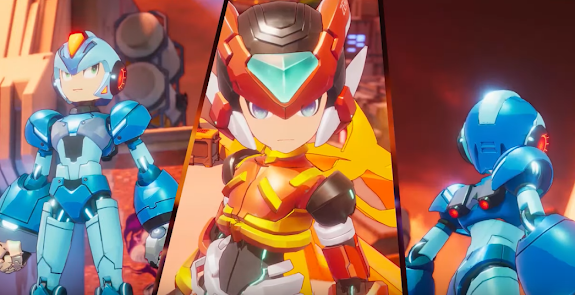 Well, here's a doozy of a story for you. A former NebulaJoy associate -- the same individual who produced those unusual, misleading Rockman X DiVE ads -- posted a video earlier this month that might be our first look at Rockman XZ: Time Rift.

The 19-second unlisted clip depicts X and Zero (Zero series) trading blows in a nondescript facility. Zero relentlessly pursues X with his Z-Saber. X dodges, leaps backwards, and musters up the power to unleash a Hadouken. And that's that.

The character design are unique, if not unusual. X is very clearly based on his Ver. KE incarnation. Zero is a mish-mash between the recent Eastern Model kit and his Mythos design. Also, X's voice is unmistakably Masako Nozawa. Funnily enough, it's actually a sound clip from the "X-Buster" (ROCKMAN HOLIC) music video.

For the uninitiated, NebulaJoy quietly announced Rockman XZ: Time Rift on September 4th, 2020. It's an officially-licensed mobile game that acts as a crossover between the X and Zero series. The game's logo goes so far as to incorporate both the X series "X" and the Zero series "Z" to drive that point home.

In June 2021, a representative from the company informed us that the game would primarily be a single player experience with some multiplayer elements. The developers are aiming for a "console quality" experience, not too dissimilar from Devil May Cry: Peak of Combat. Time Rift is due sometime between 2022 and 2023.

Without much context, it's difficulty to say with absolute certainty that the footage belongs to Time Rift. I mean, it definitely fits the bill. It looks like a would-be X/Z series crossover. And if it is Time Rift, we're left to wonder if this is from the game itself or a target render.

Whatever the case, we'll keep an ear to the ground.

Posted by Protodude at 4:32 PM