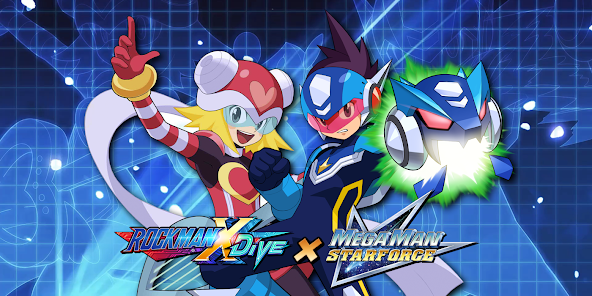 For a good while now, Capcom Taiwan have been teasing Rockman X DiVE players with numerous Star Force weapons. The Nightmare Saber or the recent Heart Spray Gun, for example. And now, it's finally time for the first Star Force character to join the "Deep Log".

The event "Bond that can't be severed" will go live next Wednesday through September 22. It comes with the S rank weapon SuperMag Gun based on Mega Man Zero's Aztec Falcon design.

You will be able to obtain Star Force Mega Man for free by playing the event stage or by getting him from the gacha banner. The trailer doesn't describe his active skills but by the looks of it, he has a Charge Shot and something that resembles Bass.EXE's ground shooter skill.

Harp Note, on the other hand, is a S rank character only obtainable from the gacha banners. Her active skills are:

Harp Note also has some kind of barrier but the trailer doesn't explain the conditions to active it.
----------------------------
There you go. You've been waiting for this for a long time and you'll be able to enjoy the first Star Force characters this week! What's more, Rogue is the boss of the event stage! And based on how Capcom Taiwan operates, I think there is a high chance he will become playable next week.
Stay tuned for more news!
Posted by Reploid21XX at 9:42 AM