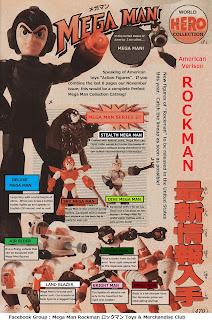 Daniel "Protoman"Arseneault of the Mega Man/Rockman Toys & Merchandise Facebook group has passed along a fun bit of history. It's a Japanese magazine clipping showing off a handful of unreleased Mega Man toys from Bandai's Ruby-Spears line!

A low-res version of this page appeared on Joey's Mega Man Corner decades ago. However, Daniel scanned it in a much higher resolution and even translated it! We get a good look and descriptions for the unreleased Stealth Mega Man, Sky Mega Man, and Dive Mega Man figures. The Deluxe Mega Man and the Land Blazer vehicles are here, too. I don't believe it was ever confirmed that the later could "transform." Neat!

Although it isn't uncommon for sample or pre-production Mega Man toys to pop up online, these particular products have yet to be found. A few  showed up at the 1995 Toy Fair and... that was that. So until they're found in a dusty warehouse or something, this clipping is all we got.