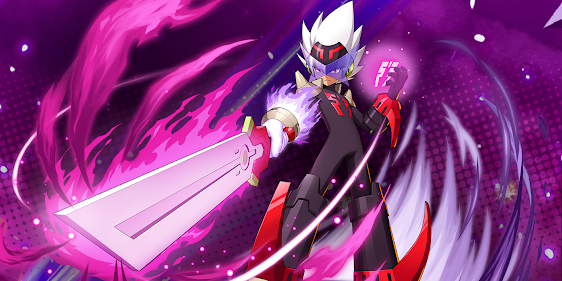 Once the boss of the "Bond That Can't Be severed" event, Rouge from Mega Man Star Force is becoming a playable character! He'll be arriving this week alongside the first Guild Boss.

Rogue's first active skill is Rogue Fist. The attack damages all enemies along Rogue's path, releasing a shock wave of energy afterwards. The attack can cause slow status too.

Rogue Break is his second active skill. Rogue unleashes three big pillars of energy in front of him, permitting him to use Rogue Fist again with the appropriate skill card equipped.

One of his passive skills will increase damage dealt when HP is low. Another one will grant him an invincibility shield.

Rogue will be available this Wednesday through September 22nd.

The first Guild Boss arrives to the game this week, too. It's a familiar face, the first Raid Boss himself: Wolf Sigma.
While the video doesn't mention the PVP mode "3v3", you can see it when they are talking about the "invite friend" feature. It was announced back in April alongside the Guild System and the Monster Hunter collaboration. Maybe it's coming soon?
And speaking of soon, the Steam version is again mentioned at the end of the video. It's estimated to launch sometime this month. It'd be ideal if it came out sooner than later so PC players can team-up to fight the first Guild Boss.
Next week will likely be a chill week in preparation for another big event the week after. X DiVE players, look forward to it!
Posted by Reploid21XX at 1:54 PM