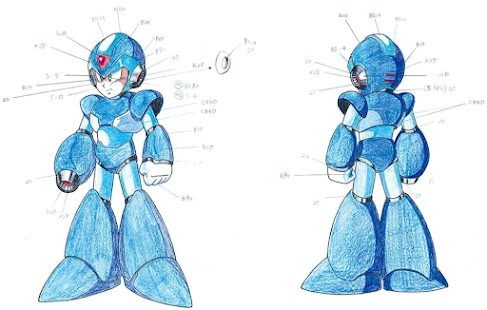 A brand-new guest post by Mega Man historian Zan Sidera explores an age-old question: is X a robot? Or a Reploid? The proverbial line in the sand may not be as clear as we thought...
The Reploid Variable
by Zan Sidera
Google Docs Version

“Reploids... created by humanity, yet possessing abilities far beyond our own…”

In 21XX AD, Dr. Cain -- the most gifted roboticist of the era[1][2] (sometimes archeologist[39], sometimes paleontologist[67]) -- is known to have developed robots containing an innovative new feature - the ability to think, feel and make decisions for themselves[1][2][3][4][5][18][19][23][25][36], having emotions[6] and sentience[7][8]. The very first that he developed (who may or may not have been Sigma) was a robot born with the highest abilities, without comparison from all prior robots, and seemed to exhibit limitless strength and intelligence[9][10].

The Reploids, however, were not Dr. Cain’s original creation. Prior to their development, Cain had unearthed the laboratory of Dr. Light, renowned as The Father of Robotics[12]. Deep therein, he discovered the good doctor’s magnum opus: Mega Man X[18][19][27].

Guided by Dr. Light’s design notes[26][39] -- which were a quantum leap beyond anything the world has ever seen[26] -- Dr. Cain set out to research[26], analyze[29] and reverse-engineer[29][30] Mega Man X. Though he didn’t completely understand how all of Dr. Light's systems worked (therefore not all of his functions could be fully analyzed[31][23][39]), Cain succeeded in replicating and integrating Dr. Light’s design concept (after a few small revisions to the system) to give birth to what he would later call his first Reploid: a replica of X[9][23][26].

Due to the peculiarities of this origin, it is often thought that Mega Man X himself is not a ‘Replica’, thereby X (and his contemporary, Zero) are excluded from being Reploids[32].

On the other hand, Dr. Light himself always intended for someone like Dr. Cain to carry on his work in a far-flung future[18][19][25], calling X the “first” [18] of a new generation of robots characterized by their humanity. As robots designed to look like humans[33], with advanced mental capacities roughly the same as a human’s[12][17], any robot with a Distress Circuit (Zero included[20]) would be considered a Reploid.

By this train of thought, rather than Reploids being replicas of X,“they are androids who are replicas of humans”[34], thereby, Mega Man X is a ‘Replica’ and considered a Reploid.

The concept of X not being a Reploid, despite in-game claim to the contrary[18], appears to have come from The Journal of Dr. Cain[9] section of the first game’s manual. However, this material did not actually exist within the original Japanese manual. Instead the original contained a different Introduction Story[4], an extended Warning[19] and main character profiles[8.1].

The Journal of Dr. Cain eventually made its way into the canon through Rozner Labs’ 1995 port of Mega Man X (by Stephen Rozner of DOS Mega Man infamy), when it got translated into Japanese the following year. Materials from the English version were then edited to better fit the story and combined with the Japanese content into one super manual. This edited Journal was also reprinted in 2005’s “Compendium of Rockman X”.[9]

Overall, there seems to be a lack of proper distinction between the Reploids of 21XX and the humanoid robots of 20XX[49]. Since robots are now divided into only ‘Reploid’ and ‘Mechaniloid’[11][36], calling them Mechaniloids wouldn’t be right either.

Now, the rare and ill-defined term ‘Bioroid’ (バイオロイド, from bio- bios, life) is also said to exist in the setting (as seen with Togerics[50], a mechanized plant from Mega Man X4). Its most notable use comes from the ZERO-series. Namely: the Four Guardians of Neo Arcadia - The ‘Big4 of X-Bioroid[51].’

What the above example nicely highlights is exactly how the developers handle X's connection to his fellow Reploids.

If one focuses on their similarities to X, he is to be included.

If one focuses on X’s differences to them, he is to be excluded.

Without spoiling much, Rockman X The Novel -Irregulars Report- by Tsubasa Todoroki nicely tackles such ‘hidden setting’[68] details in all its complexities, taking seemingly incongruent interpretations of the Mega Man X-series and weaving them into a single compelling narrative.

For those who haven’t read it yet, and find themselves interested to know more, -Irregulars Report- is available here for your reading pleasure.
Posted by Protodude at 2:23 PM