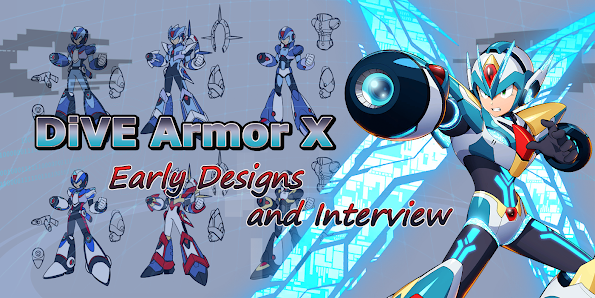 Released earlier this week, the new S rank DiVE Armor X is an original character whose origins can be traced back to the level 70 armor set from 2020. With its cool, sprawling holographic wings, the armor inspiried a wave of fan-art almost instantaneously. It quickly became a fan-favorite.

Yesterday, the development team shared early designs and concept art from Keisuke Mizuno in the latest  Maverick Information video entry. And today, by way of the Official Facebook Page, we have an even better look at those design sheets! There's even a small interview with Keisuke Mizuno itself, too.

See and read all about it below!

Reposted via the Rockman X DiVE Facebook page:
Mr. Mizuno, the artist of CAPCOM, came up with his own opinion and the how his design would tend to be in the future after he designed DiVE armor X this time. 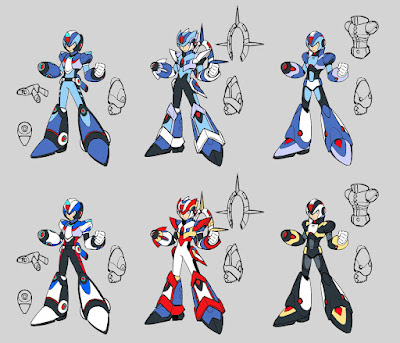 What is the design concept of DiVE Armor X this time?

"One day when I wanted to commit the new original armor of X in game, I proposed an idea, “​​How would it be if I use the icons of the equipment as design inspiration?”; and Mr. Yoda also agreed with that, so I chose one of them as the modeling of the armor. Maybe it can be also committed on Zero or Axl in the future.

Are there any key attention point during the period you designed?

I adjusted some parts of the original design of the icon size equipment picture when I graphed it as the armor. In addition, according to the character’s setting, I added in much eye-catching elements that were never been seen in the series before, such as floating wings, glowing inside the armor and at the joints.

Because the in-game settings such as skills were done after the modeling is finalized, an armor with greater flexible was designed which its wing-like special effects can be changed freely, sprinting, flying, or using hand cannon; also, it can use a skill like his clones as a decoy to induce the opponents to attack them. 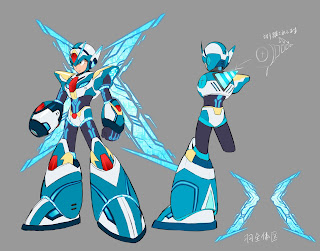 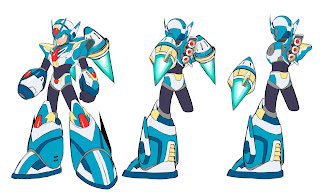 What kind of armor may Mr. Mizuno would like to graph in the future?

If it's an existing armor, I really like the original modeling of the intermediate armor that appeared in the X8. I want to know how it would feel to be presented in my own style.

If it is an original design like this time, I really hope that each character can have their own original armor. I also want to see Sigma's X DiVE look.

Personally, I think it would be interesting if RiCO put on the super-heavy armor of the Ultimate Armor X CM.

About the armor of X in the future, no matter whether they are possible to be installed or not, I think there are some innovative part, for example, a part of the armor can be separated into a support aircraft, or it can attack with anti-gravity action; equipping the anchor that can pull over the opponents outside the screen, or the ability to change the terrain, etc., if you have these peculiar special skills, it should be very interesting.

It is full of possibilities!

Indeed, the future of Rockman X DiVE is brimming with possibilities. As the game grows, we're witnessing more original designs like iCO, Another Iris or DiVE Armor X (not to mentioning the seasonal characters). With Mizuno willing to give us new takes on Zero, Axl or even Sigma, you can bet there's plenty of surprises awaiting us around the corner!

I don't know about you, but my appetite for a hypothetical Rockman X DiVE artbook grows with each new character release...With more than 80 characters available and countless concept art sheets, unused designs and tales from the art team, perhaps the time is right for an artbook.

What do you think? Would you be interested in a Rockman X DiVE artbook?