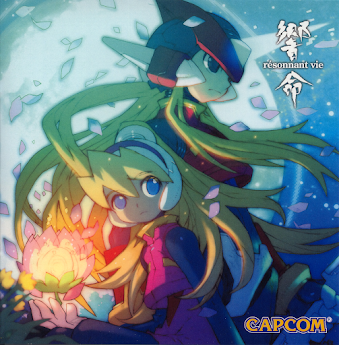 Released back in 2011 alongside the "NEW Best Price! 2000" edition of the Rockman Zero Collection, résonnant vie is packed with a selection of 13 acoustic arrangements  from the Zero series. What's more, it was the final Rockman CD distributed by Inti Creates.
This album is a "sound remake" of Rockman Zero's setting. It's based on the paradoxical concept of arranging songs from the mechanical world of Rockman Zero using mainly non-powered live instruments. It re-expresses the strength and mystique of life, such as the concept of a "soul" and the core as a "life-form" that Reploids have acquired despite being mere "machines".
Thanks to our friend Windii Gitlord, you can read the soundtrack's booklet in English after the break! 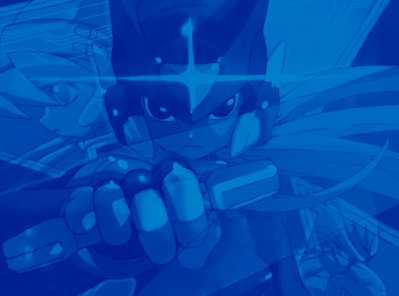 This album was conceived soon after the release of Mythos. While Mythos is mostly up-tempo and intense rock music, Rockman Zero has many melodious and lyrical songs, so we thought it would be a good idea to put these songs together and make an album with a different approach. There were many comments from fans that their favorite songs were not selected for the Mythos album, and we had been discussing the possibility of releasing the album if there was an opportunity.

The opportunity came suddenly at the beginning of the year. It was the news of the release of the bargain-priced version of Rockman Zero Collection. I immediately started working on making it happen. The general plan has been decided. It would be a gentle and quiet collection of arrangements, mainly of songs that were not chosen for Mythos, and would be a counterpart to Mythos. However, as the production progressed, I was confronted with the question of whether there was any significance in releasing an arrangement collection for an action game with the concept of different piano arrangements or a healing album. To answer this question, I decided to add the concept that since this is an arrangement soundtrack of game songs, it should express the games in some way. In the process of arranging the songs, we reconfirmed the events of the games for each song, and reconstructed the world of Rockman Zero, while keeping the acoustic part to contrast with Mythos. In other words, this is a Rockman Zero acoustic remake. For this reason, the production procedure involved a small twist of arranging the music once and then reworking it to fit the game's events. For example, once a song is arranged as a bossa nova, the bossa nova rhythm may be modified to fit the games' imagery. With different musical values, the first arrangement would have been sufficient. However, as an arrangement for game songs, I thought it needed to be tweaked once.

The production of this album was extremely difficult due to the limited time available from the beginning and the unprecedented earthquake that occurred towards the end of the production, unparalleled in recorded history, but thanks to the cooperation of the people involved, we have managed to complete the album. I would like to express my gratitude to all those involved, and I hope that the feelings and care put into this album will be appreciated by Rockman Zero fans.

Cyber Elves. Inhabitants of the cyber world. Are the forms that appear in the real world just an array of electrons? Are their words and singing voices like electrical noise?

02 For Endless Fight in Resonance

A stage in the wilderness. Zero was walking. Going on and on, cutting down all the enemies that stood in his way, pushing through the wasteland. Defeating the enemies in front of him was the only proof of his existence.

03 Break Out in Resonance

A stage with a crashed spaceship. The ark, laden with the negative legacy of the past, is thrust back into the earth. To face the truth that was driven into space long ago, we now put our hands on the door. The door to a fierce battle.

Antarctica stage. A world of ice as far as the eye can see. The air is crystal clear, without a speck of dust. A cool tension surrounds you, freezing everything in place.

Ciel's theme. In the devastated world of Rockman Zero, the position of the heroine Ciel may not be the most glamorous one. Like a flower that blooms quietly on a cliff, she blooms healthy and firmly, but vividly.

06 Trail on Powdery Snow in Resonance

A stage in a snowfield with mountains buried far in the snow. A sense of crunchy ice, translucence, and desolation. An unyielding spirit travels alone through such a frozen world of ice.

A Dark Elf manufacturing plant modified from an energy furnace. The cold steel and concrete of the fire-damaged factory. And a cold, cold smile that sees the lives of Cyber Elves as nothing more than energy.

Area Zero. The spot where nature is recovering in the devastated world of Rockman Zero. It's a small place, but it's filled with the bright smiles of people, the strength of nature, and hope.

09 Falling Down in Resonance

The final battle against the furious Vile. The battle becomes fierce. The space fortress Ragnarok falls from the atmosphere to the earth. At last, it became a ball of fire that burned up and rained on the surface... Zero never came back.

What remains after the battle is the rubble, the wreckage, the sorrow of the weak and powerless. But that's not all, there is also rebirth, recovery. Hope for tomorrow. It is those who live in the present who will create a bright future.

Alouette's theme. She is always sunny, innocent, and cheerful. With her small body, she carries her destiny as best she can, and her big eyes gaze at a peaceful and hopeful tomorrow.

12 Awakening Will in Resonance

The end credits of Zero 2. Zero, who has lost his old memories, throws himself into the battle as his own identity. His will is awakening. In a sense, this is the symbolic theme of "Rockman" Zero.

The final battle with Omega. The ties from the Elf Wars with Omega. The fact that there is a copy body. The dark truth is gloomy, heavy, and shocking. In order to settle it all, the two spark fiercely, brilliantly, and dramatically. 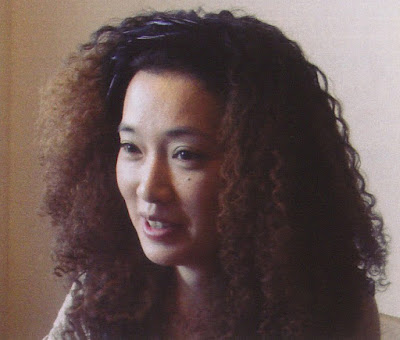 —Do you remember what you had on your mind when you were asked to write music for Rockman Zero for the first time?

I'm embarrassed to say that I had no knowledge of the Rockman Zero series, and as the name suggests, I started from "zero," so although I had received a lot of materials, I remember that I started with a lot of fumbling around.

—Which of the songs you provided for Rockman Zero is your favorite?

—Were there any instances where you had difficulties in providing songs for Rockman Zero?

One of the first things I remember struggling with was that when I was writing "Labo," IPPO asked me to revise the song many times, saying that it was "different from the image of Ciel." I myself knew the character of Ciel as I proceeded to write the song, but at first I was so fixated on the image of a "female scientist" that I had a hard time creating a song that fit the "Ciel" image.

—Are there any songs from Rockman Zero that you like that you didn't write yourself?

"Clover" is a song where IPPO's melody and Itoga's voice match perfectly. It's cool and I love it. I also love "I, 0 Your Fellow" for its beautiful harmony. There's no end to the list, so I'll leave it at that, but I love them all!

—Do you have a favorite character in Rockman Zero?

I actually love Ciel. It's amazing how talented a 14 year old she is. I also like how she looks. I think she is a very charming heroine. Also, Alouette and the old man who talks on and on and on... Andrew, was it? He also has some appeal, doesn't he? I'm sorry for all the off-topic answers. I guess I'm basically looking at things differently (laughs).

—If you had to describe the music of Rockman Zero in one word, what would it be?

Dark-ish? Hopeless-ish? "There is hope in the midst of darkness and despair"-ish? There is a deep sense of the world, isn't there?

—Please tell us about the appeal of this album.

This is a collection of songs with particularly striking melodies from the Zero series, so I think you can enjoy the beauty of these melodies. It's a pleasant album to listen to casually in your room, but I think you'll discover something new if you listen to it carefully.

—What were you thinking about when you made the arrangements for this album?

Overall, I wanted to bring out the beauty of the melodies the most, but if I were to explain each song individually, I arranged "Ice Brain" to be rhythmic and cool, and "Labo," "Holy Land," "For Endless Fight," and "Cold Smile" were created with scenes from the game in mind.

I intended for "Trail on Powdery Snow" to give off the feeling of walking on snow through strings, and "Break Out" is the first stage song, so I tried to keep it as close to the original as possible.

I arranged "Ciel d'aube" and "Awakening Will" to create an overall beautiful atmosphere, and "Alouette March" to create a cute and innocent atmosphere without changing the appearance of Alouette.

—In addition to Rockman Zero, you have worked on a lot of other game music. Do you have any emotional attachment for game music?

—Do you usually play games?

I actually don't play much, though I do have a Wii and a Nintendo DS.

—What music do you like and what artists have influenced you?

I like Jay Oliver of the Dave Weckl Band, Lyle Mays, and many others, but since I'm a keyboard player, there's probably more keyboardists that I like. Debussy is probably the most influential for me. His harmonies, the way he used titles, and the way he evoked imagery in his music are very similar to game music.

—Please tell us about your musical activities other than game music.

I lead a unit called "Lu7" with Tsutomu Kurihara , a well-known guitarist from the Zero series, and on our second album,  Toru Itoga  joined us, and we aim to create music that is visual and comfortable to listen to. Each album has a different concept, as we hope that you can enjoy the music in different ways when you listen to it.

Born in Tokyo, Japan. In 1984, he debuted with EUROX through Warner Pioneer, and has since written anime songs such as "Panzer World Galient," commercial songs for Suntory and Miki House, and songs for many other artists such as Nakamori Akina and Nyangilas. He has participated in many recordings for CLASS, Ono Masatoshi, Yonekura Toshinori, Tanaka Minako, Sendou Akiho, Tamura Eriko, Tone Mariko, Funta, and so on. In 1998, he formed EGQ and released two albums through Crown Records. At present, he has formed Lu7 with Umegaki Luna, and released the albums "efflorescence," "L'esprit de l'exil," and "Bonito." EUROX performed the opening theme for the OVA "Saint Seiya: The Lost Canvas" released in 2009.

Born in Hokkaido. Began playing drums in junior high school and moved to Tokyo at the age of 18. Started playing professionally while still in music school. After that, in addition to performing, he is also active as an instructor at Mica Music Laboratory led by Matsutouya Masataka. His representative work is Gotou Fuyuki's first album "Gotou Fuyuki."

He is a multi-instrumentalist who uses everything from saxophone, clarinet, ukulele, Japanese transverse bamboo flute, recorder to electronic instruments. This time, he participated with soprano, alto saxophone, and small percussion instruments.

He is a multi-instrumentalist who is well versed in all brass instruments including trombone, trumpet, percussion, drums and didgeridoo. This time, he participated with djembe and conga.

For more soundtracks booklets translations check the list below: