The Rockman X DiVE  development team published an online questionnaire to gather feedback from the Rockman X DiVE Beta players, and some special features that may be added to the game in the future have been revealed! More info after the break!

Now, let's talk about the questionnaire. For the most part is just an average questionnaire asking you to provide information about you, the kind of games you like, how much money you are willing to expend, favorite Rockman Series (funny enough they missed the ZX Series) and general feedback about the game itself and what do you think about different aspects like graphics, performance, mechanics and so on, the questionnaire goes pretty in-depth.

The interesting part is when you reach question number 39. 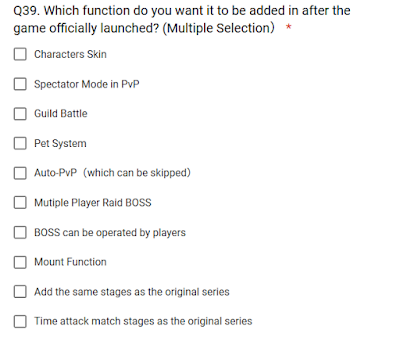 We already know that character skins are in the game (not available in the Beta) but, the other things are brand new and likely some of them will end up in the game at some point.

So what do you think? Which one of this features will like you to have in the game? Let us know in the comments and don't forget to fill the questionnaire as soon as possible if you want to get the rewards.
Posted by Reploid21XX at 8:04 AM