It seems the fighting community faithful have been very busy gutting Street Fighter X Tekken for downloadable content clues. Sure enough, their efforts have paid off: every character's alternate costume has been exposed, carefully hidden away on-disc. Unfortunately for Mega Man, the big guy doesn't appear to have any alternate costumes whatsoever (though he does have lots of different colors).

For Tekken's Lei Wulong, however, it's a completely different story: 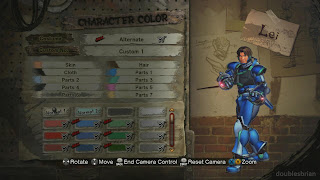 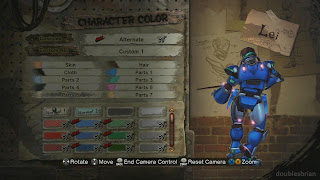 Some folks have pointed out Lei's alternate costume looks a bit like something out of the Mega Man universe, with visual elements pooled from Mega Man Volnutt and a smidgen of Zero/ZX series designs. I can see the resemblance, but it's definetly not the reparation some fans had in mind. Nonetheless, this costume (and all others discovered) will be relegated to future DLC.

Hopefully, Mega Man does have an alt. planned and it simply wasn't included on the disc. After all, it wasn't too long ago that Svensson mentioned he'd speak with Ono about a possible "traditional" costume for old man Mega. Perhaps it's being designed right now, post-production? Well, only time will tell.

Source: Shoryuken (thanks, David!)
Posted by Protodude at 2:19 AM