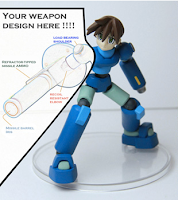 I'm a bit late to the party on this one, but in case you haven't heard, Get Me Off the Moon kicked off a community-wide contest in an effort to revitalize the Devroom.  The aptly titled Neo Devroom campaign invites fans to design a new weapon for Mega Man Volnutt.

Simply design a cool, unique and useful weapon for ol' Volnutt, and you could win some pretty slick prizes. The top entries will receive either a set of Legends themed Perler Bead sprites, a copy of Mega Man Tribute, or one of Ryan Shower's custom Mega Man Volnutt figures WITH the winning weapon attached. Oh, how sweet it is.

Anyone can participate, so long as you're a resident living in North America and the UK. Up to three entries can be submitted by March 29th. Full contest rules and regulations can be found here.

So far, things are off to a great start; everyone's excited, everyone's having lots of fun. In fact, this is the first time Capcom Unity publicly recognized and supported a Get Me Off the Moon campaign. That's pretty interesting in itself, wouldn't you say? So get those designs in ASAP! Capcom's watching...
Posted by Protodude at 11:20 PM