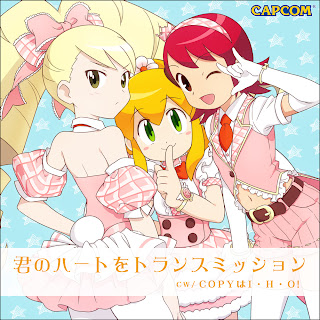 The trio's debut album, titled "Transmission to Your Heart", will release on December 17, 20XX in commemoration of Mega Man's 25th anniversary. Furthermore, the girls will host a live concert on the rooftop of Capcom HQ on the album's launch date. Original posters will be distributed to attendees on a first-come-first-served basis.

Truly, an unexpected announcement. I mean, it’s not like it’s April Fools' day in Japan or anything. Preposterous!

I have to admit, it's delightful to see these three beloved characters perusing a singing career in lieu of starring in actual Mega Man games. You gotta get bread on the table somehow! Curiously, singing sensation Sonia Strumm isn't included in the group. Perhaps she's off honing her solo career? Or maybe her and Luna had some sort of juicy fallout?

We'll keep an eye on the tabloids. (Update: In case you haven't figured it out by now, yes; this was an April Fools' joke.)

Source: Rockman Unity (thanks, Amunshen)
Posted by Protodude at 3:34 PM