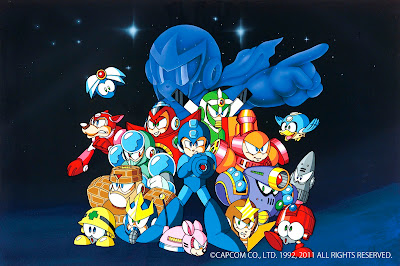 Mega Man 5 is coming to the European Virtual Console this Thursday, Nintendo announced. The news comes a couple weeks after Mega Man X1 released, so if you have some Wii Points left over from that purchase, might as well invest in MM5. Press release below:

"Proto Man, once the trusted brother of Mega Man, has mysteriously gone berserk, kidnapping Dr Light; forcing Mega Man to go on the offensive. Assisted by his new sidekick Beat, a robotic bird, and his faithful robo-dog Rush, Mega Man must battle through eight thrilling levels and defeat the Robot Masters lurking within. Defy gravity in Gravity Man's stage, chip away the defences in Stone Man's stage, and catch some surf in Wave Man's stage – all before the final showdown of the century."