So, there's been this teaser site for an unknown game that looks to crossover characters from Capcom, Sega and Bandai Namco (with Banpresto designing it as a Nintendo 3DS game). Each week a new 'chromosome' is added to a company's respective 'petri dish', synonymous with that company's characters.

Last week, this was the general consensus:

And this week, someone very exciting has been added to Capcom's dish. Check out the lower right corner: 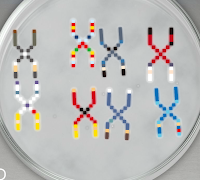 Speculation says the latest chromosome is none other than Mega Man X; a minimalist representation of the character's armor, skin and helmet emblem. I'd take this tidbit of interest with a grain of salt, but the prospect of X being involved in this crossover (alongside Zero) is certainly enticing. Guess we'll just have to wait and see how all this turns out!

Thanks for the tip, Ralene!
Posted by Protodude at 12:26 PM