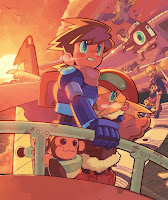 Just a friendly heads up to those who imported a PlayStation Vita from Japan: Rockman DASH 2 is now available on the UMD Passport service.

UMD Passport gives you access to download versions of your retail PSP UMD games at discount prices. Other Rockman titles available from the service include the original Rockman DASH, Irregular Hunter X and Rockman Rockman. With DASH 2 under its belt, Vita is now home to the complete PSP Blue Bomber catalog. In Japan.

For the time being, there will not be a North American equivalent of UMD Passport. You can, however, re-download any PSP game purchased digitally. But, really, the only Mega Man title that fits that criteria is Maverick Hunter X. Purported compatibility issues prevent the digital release of Mega Man Powered Up outside of Japan; a problem which has yet to be rectified. Yes, I don't understand it either.

For the full list of UMD Passport titles (new and old) check out this video Sony released recently.