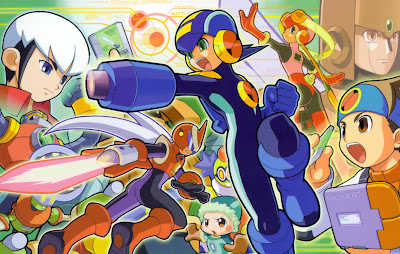 Maybe not everyone is aware, but the first Rockman EXE (Mega Man Battle Network) game released in Japan on March 21st, 2001. Technically, it's the 21st in the East right now, so EXE official turned eleven years old today.

Fourteen games and five anime seasons later, EXE remains as one of the more successful/popular series'. In the interim, the fanbase continued to thrive: communities are just as devoted as always, and unwavering passion is leading the way to new projects. And, of course, demand for a full-blown revival is just as fiery as it's always been.

So for now, congratulations on eleven years, EXE. Hope to see you again some day!
Posted by Protodude at 3:32 PM