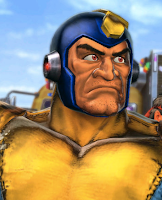 Over at Siliconera, a brief interview has been posted with Yoshinori Ono, producer of Street Fighter X Tekken. There, he offers further reasoning behind Mega Man's outlandish and highly exaggerated appearance. We're well aware this iteration is based off of the infamous Mega Man 1 box art caricature, but there's a little more to the story than that, apparently.

"Mega Man’s… aged since his picture was taken and used in the US box art. It’s been 25 years since, after all. Just like how one’s father may look different in photos taken 25 years ago and today, Mega Man’s outward appearance has changed," explains Ono to Siliconera.

"We decided to do it like this after consulting with Mega Man’s creator Keiji Inafune who left Capcom last year. Story-wise, like all other characters in the game, he is looking to acquire Pandora for a specific reason."

Naturally, we're left to speculate why the old man's out and about looking for Pandora. However, Mega Man's previously revealed bio may hold some clues: "He is always running around in a hurry due to the demands of his partner Roll, and this time he's been asked to travel to Antarctica to retrieve a mysterious box."

Speaking in terms of fighting style, Ono indicates Mega Man's a bit of a rule breaker. "Mega Man and Pac-man have their own unique moves and fighting style. However, Mega Man is a character that fights with weapons while Pacman rides on Mokujin in battles, so the whole thing kind of going against the rules," says Ono.

"And although they are not official tag partners, each character has its own prologue and ending so please do connect to the Sony Entertainment Network and obtain the playable code for both characters. It’s free."

Free DLC? Well isn't this is a lovely surprise. Still, I'm not sure if that incentive will be enough to quell some of the frustration around the community. It's a start, at least. Give me an unlockable classic attire for kicks, and I'm sold.

Full interview available at Siliconera
Posted by Protodude at 9:13 PM