Mega Man and Friends Set To Cameo In UMvC3 Endings

For the time being, Mega Man isn't playable in Ultimate Marvel Vs. Capcom 3. Fortunately, the blue bomber hasn't been given the cold shoulder entirely. According to new UMvC3 footage and screens from around the community, Mega Man and pals will guest appear in both Nova and Thor's ending cutscenes: 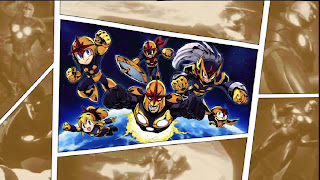 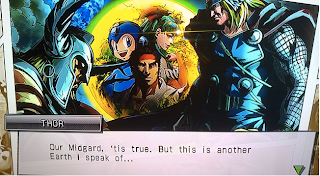 Nova's ending not only manages to sneak in Mega Man, but also the likes of Roll, Proto Man, Zero, and Beat -- all decked out in traditional Nova Corp. threads. Veteran of vanilla MvC3, Thor's touched up ending now features a nod Mega Man, Ryu, and Morrigan.  So far, only footage of Nova's ending has surfaced, viewable here. Thor's should be coming along soon. In the meantime, here's a few comparison shots.

And now, the million dollar question: teasing or trolling?  It's times like these I'm reminded of Destructoid's recent Seth Killian interview: "When I questioned Killian if we'd see more DLC past Heroes and Heralds mode he responded 'We'll see.' So Mega Man and more DLC for UMvC3 has neither been confirmed or denied. The dream still lives... at least for now."

All's not entirely lost just yet, it seems. Still, it's best to continue to rally support and raise your voice. Something's gotta turn out right for our blue boy!
Posted by Protodude at 5:03 PM