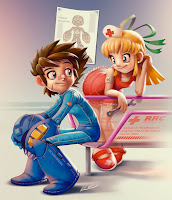 You may not be aware of this, but by day, I am an assistant elementary school teacher. Though most of my hours are spent within the confines of the classroom, I frequent our library to stock up on books for the kiddos from time to time. There's your run-of-the-mill Dr. Seuss tale and Harry Potter lying about, but sometimes there's stuff that piques my interest... like Mega Man.

A big initiate going on in the country right now is the push to integrate comics books and graphic novels in the classroom. Studies and statistics show comics are a fantastic way to promote reading in reluctant readers as well as help teach writing, critical thinking, and creativity. And it really works. Quick to capitalize on this, my location has been ordering comics by the boatload -- and we've received plenty of Mega Man.

Megamix, Gigamix, ZX, NT Warrior AND even Archie's omnibus, my school library has a near-complete collection of the Blue Bomber's graphic novel adventures. Kids that have never even heard of the character before are now finding themselves engrossed in stories weaved by Hitoshi Ariga and Ryo Takamisaki. For this longtime fan, it's an awesome sight -- true reassurance that interest in Mega Man proceeds onward to the next generation. But this is only the beginning.

I came to discover the Mega Man IP, itself, is being highly recommended by school districts throughout the nation. Panels of teachers and administrators have spent many hours evaluating elementary school-eligible comics for library use, and Mega Man ranked high across the board. And that's not just because the comics are generally kid friendly: the books specifically promote the criteria teachers are looking for in comics: stories and text that captivate, inspire and teach. In time, there may be a Mega Man comic in every elementary school library. That's an incredible honor.

The roots of future fans may not be tied to gaming; rather, Mega Man comics. Certainly an ominous realization, but given Mega's uncertain video game future, it's a reality that isn't too far-fetched. And, hey, that's okay with me. When a new game eventually comes around, there'll be fresh young fans ready to fight for everlasting peace.
Posted by Protodude at 6:03 PM