Rockman At the Osaka Science Museum? 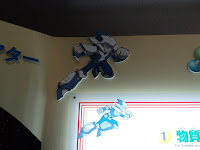 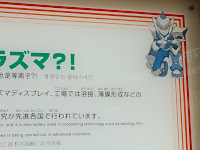 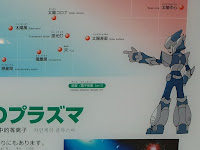 As they say, imitation is the sincerest form of flattery. Sighted at the OSTEC Exhibition Hall in Osaka, here's a Rockman look-a-like showing visitors the basics of energy, matter and electricity:

The character is interesting mix of your run-of-the-mill Rockman X armor, a bit of a Shooting Star Rockman (i.e the helmet), and a pinch of Zero series elements. The character is apparently plastered throughout the children's wing, acting as a mascot for the energy-based exhibits.  Interestingly, the nod to the Blue Bomber goes beyond aesthetics: a video presentation depicts the character using solar energy to powerup a Rock Buster-like weapon... the very same source of energy consumed by Rockman's own Buster.  No footage of that, but I imagine it must be pretty nifty.

We've seen plenty of Rockman doppelgangers here at Rockman Corner, but none so... cool? Usually they're a mess; a conglomeration of random character traits hastily thrown together. But this guy? He's actually pretty slick. Whoever designed this fellow was clearly a fan.

Thanks for the tip, RonJon! (via Tepid Water)
Posted by Protodude at 8:38 PM