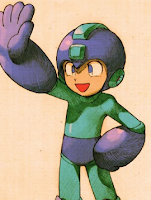 The enigmatic Lupinko is at it again. The man who accurately leaked the entire vanilla Marvel Vs. Capcom 3 and Mortal Kombat 9 rosters (among other fighting titles), has recently hinted Mega Man (and Pac-Man) will be a playable guest character in the upcoming Street Fighter X Tekken.

"Everybody will love the yellow dude's style, but blue boy will cause lots of lols or lots of rage, wait and see! Excelsior!"

Street Fighter X Tekken is no stranger to guest characters, what with Cole (inFamous) Toro and Kuro (Sony cats) fleshing out the roster. Mega Man and Pac-Man, Capcom/Namco's respective mascots, seem like a fitting addition to an already diverse cast.

Compensation for Mega Man's MVC3 no-show? Hopefully. Lupinko has been spot on for the most part, so there's definitely some credence. And don't forget that ending bit from the game's announcement trailer. Suffice to say, that does support the rumor.

Better ready those grains of salt just in case.

Source: @Lupinko (Thanks, Clown Prince of Crime!)
Posted by Protodude at 11:30 AM