We've seen some amazing Mega Man-themed pastries here at Rockman Corner; the amount of creativity and hard work that goes into these scrumptious creations never ceases to amaze. Just when I though I'd seen it all, Yummy Pixels comes along with this: 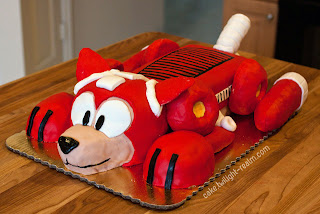 Mega Man's faithful canine companion Rush is a master of transformation -- but this latest form certainly takes the cake. Kat, the self taught baker of Yummy Pixels, whipped up this Rush Jet cake for her husband's birthday:

"I was thinking of doing Rush early on but hesitated at first. The last time I did a character cake (Kirby), it was kind of sad to cut into it… But! I went ahead and made a cake of him anyway since Buckley likes the Megaman series so much. I chose his jet form since he’s lying down and is mostly flat.

This cake ended up larger than I originally planned. I accidentally made his head too big, which meant making everything else bigger to be proportional. He is made from lemon-orange cake and rice krispies. His head, body, and 2 front paws are carved from cake. The rest of the parts are rice krispie treats molded into shape."

While it may look delicious, I think we can all agree it would be hard taking a knife to this masterpiece. And standing on it wouldn't be too bright, either.

More photos of the cake available at Yummy Pixels. While you're there, be sure to check out Kat's other masterpieces, like the Sandvich!