Since 2009, a colorful display of adorable oversized Servbot replicas greeted visitors to Capcom's Tokyo headquarters. Sometimes, they even pose with celebrities. However, those days have come to an end. The bots have been seemingly replaced by equally adorable, oversized Monster Hunter Felynes. 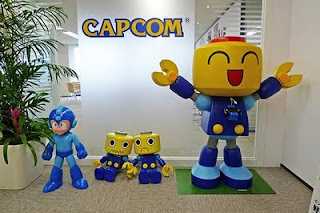 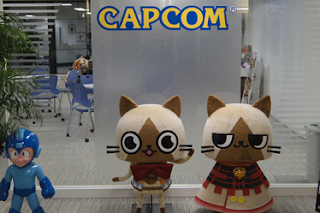 Left: 2009 | Right: 2011
Now, now... I wouldn't look at this as some sort of conspiracy against Rockman DASH (because that's just ridiculous). People generally like to rearrange things from time to time, you know? Helps living spaces stay fresh and lively! Fortunately, Rockman himself remains diligently in position. That statue (only two in existence) has been a prominent display at Capcom Japan HQ for well over a decade. It's become something of a corporate symbol.

Perhaps there is no contest in declaring that the Felynes are Capcom's most popular characters in recent years, what with their marketability spurning countless toys, merchandise, and even video games. The Servbots found themselves in a similar position in the late 90's/early 2000's -- often appearing on everything from PUDDING to Band-Aids. But those days are behind us. Their marketability has diminished within the last few years, sad to say. Fortunately, Servbots continue to cameo in numerous Capcom games, keeping them in the limelight.

But I digress. The Servbots have likely relocated somewhere else within HQ. Before '09, they frequently popped up at Capcom's Osaka offices and even Plaza Capcom as decorations. And before that? Tokyo Game Shows, promotional photo ops and Rockman's 20th b-day bash. These displays have a legacy; very little doubt in my mind Capcom would simply throw them away.