When we last checked in with Yoshihiro Iwamoto's Merti garage kit, she was but a torso. Today, X's lady friend is looking a bit more complete, now capable of standing on her own two feet! 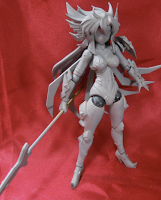 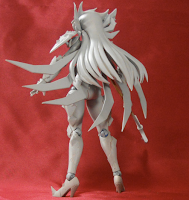 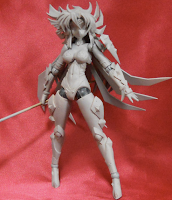 More images here!
Spiffy, no? The completed garage kit is roughly to scale with your standard D-Arts figure, so the two complement each other perfectly. Though the kit may look complete, Iwamoto notes there are a few extra details he'd like to flesh out before release such as brushing up Merti's hair and backside. I only hope the additions are minor because things look great so far!

The final garage kit will go on sale in February 2012 at Wonder Festival in Japan. Come January 27th, however, Iwamoto will hold a special launch event in Tokyo where attendees can pick up Merti a bit earlier. The event will mark the unveiling of the finalized kit, and play host to a few other surprises, too. Specific details are forthcoming.

All in all, it's pretty cool to see such an obscure character get the garage kit treatment -- officially endorsed by Iwamoto, no less. Hopefully this won't be too hard to track down and import!

Credit: The Mega Man Network
Posted by Protodude at 2:04 PM