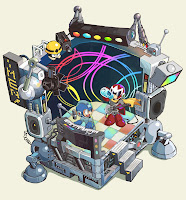 Much to the dismay of international fans, official Mega Man albums have been predominately sold exclusively in Japan for several years.  With your help, however, that may soon change.

In a thread on Capcom Unity, Christian “Sven” Svensson has put the call out for album requests, which might just make their way over to the Capcom Store.  Your task is simple: if there's a specific Mega Man album you want to see -- be it the remastered Rockman Zero soundtracks, or We are ROCKMEN! -- request it at this thread here.  No guarantee your requests will come to fruition, but really it couldn't hurt to show some support.

It might be a good idea to limit requests to soundtracks that came out within the last year or two. Anything before that is likely out-of-print.  Doubtful Capcom would produce fresh new copies of, say the Rockman X7 soundtrack just for North America.  It'll be far easier to stock up on discs that continue to be produced (and sold) today. But hey, you never know.

Drop your wish lists off here.