Tamashii Nation 2011 isn't kicking off until tomorrow, but already we have ourselves some tantalizing D-Arts news. Full color prototypes of Zero Type 2 and Vile have been spotted at the exhibit and, well, they look fantastic:

Aside from the apparent confirmation of a Z-Saber, we've no word on additional accessories and doodads set to ship with Zero Type 2. Same goes for Vile; no indication of accessories, pricing, and release date just yet. I imagine that news will be coming along shortly. Even so, there they are in vibrant color.

Also spotted at the exhibit, a D-arts Zero "Comic Version" and... a Ride Armor? 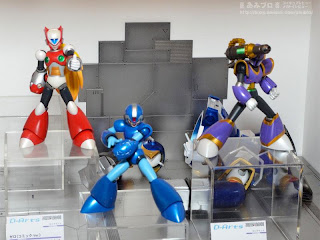 The marker below Zero there indicates a THIRD D-Arts Zero is in the works, and much like Comic Version X, it will be based off of Yoshihiro Iwamoto’s interpretation of the character. Speculation says the figure could go on sale tomorrow alongside Comic Version X, but we've no official confirmation on that. Click here for a close-up.

And then there's that Ride Armor conveniently placed behind Vile. It's hard to say at this point if the figure will actually be sold, or if it's nothing more than part of a promotional display. Bandai has been known to decorate D-arts displays with items and knick knacks that never made it to retail. Hopefully that's not the case.

Credit: The Mega Man Network
Posted by Protodude at 12:07 PM