At long, long last we have ourselves footage of the elusive promotional video used to pitch the Ruby-Spears Mega Man cartoon before the show was "Americanized". A rare look at what could have been, The Mega Man Homepage has uploaded the original footage in its entirety. And it's awesome. 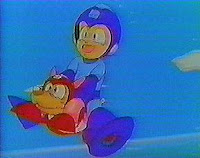 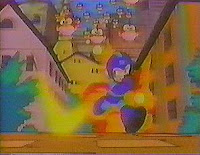 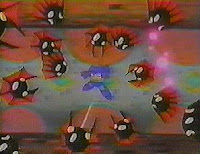 The promo tape features two-minutes worth of never-before-seen footage of a significantly different Ruby-Spears cartoon. In its early stages, the show featured aesthetics incredibly faithful to the art direction of the games, with a style largely influenced by Keiji Inafune's character designs.

When the show was finally picked up and green-lit into production, however, Ruby-Spears gave it a complete overhaul. The anime style was ditched; suddenly Mega Man became a buffed-up American Super Hero, cheesy one liners and all. Hey, at least the theme song was catchy.

We aren't exactly sure why the art direction changed, but The Mechanical Maniacs' has a pretty good theory:

"In the early 90's anime hadn't taken off yet. The biggest shows were Batman: the animated Series, X-Men, and Spider-Man. These shows were probably considered Mega Man's main competition and the show we got falls into line with these shows as opposed to any other shows on at the time. Furthermore, if you watch the OVAs, you'll see that they're preoccupied with teaching foreigners about Japanese culture. An admiral attempt, but I don't think it went over very well as many characteristics that might have been deemed "Japanese" were taken out."

Regardless the reason, I'm very happy to finally see this footage with my own eyes. It's a true sight to behold! Bit of a shame this version never came to fruition.

Thanks for the tip, RADIX!
Posted by Protodude at 10:27 PM