OSS Off To A Good Start 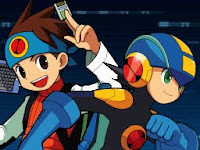 According to early reports, Rockman EXE Operate Shooting Star racked up an estimated 25,000 units on its first day on sale - a 41% sell through of the initial shipment.   Among Nov. 12th game releases, OSS charted fourth, just behind Final Fantasy Crystal Chronicles: The Crystal Bearers and DragonBall Raging Blast.

2channel estimates the title could top at least 70,000 in sales by its first week if things remain steady.  Just have to wait and see, but so far so good.
Posted by Protodude at 1:45 PM