For those interested, Capcom has posted the first of eight Rockman EXE web comics on the official OSS homepage.  It's entirely in Japanese, so you'll have to use your imagination to figure out just what the heck is going on.  Courtesy of the Mega Man Network, an English translation: 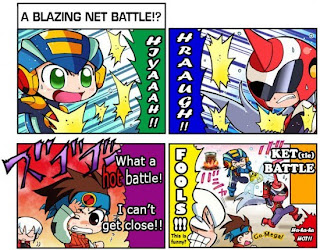 "As you can tell, this comic’s humor is derived from wordplay. Net Battle, written in Japanese, is “netto batoru” (ネットバトル). However, we find out in this last frame that is is actually a “nettou” (熱湯) battle, which means boiling water. In Japanese it seems there’s little else to pun “netto” with. But what’s funnier than some wordplay and scalding your friend horribly with boiling  hot water?"