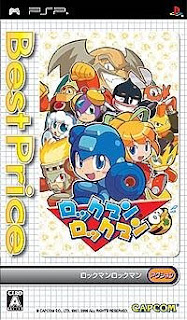 According to U-Capcom, the re-release of 'Rockman Rockman' (Best Price! Edition) is the fifth best selling Capcom title from August 18th-September 7th 2008.

For a game considered to be a commercial flop in Japan, this comes as good news. I guess it took a budget price to get Japanese gamers interested in the 'Rockman Rockman' experience...

Actually, it really shouldn't come as a surpirse to see a Capcom PSP title is doing so well nowadays compared to two years ago (when RR was originally released). Capcom's recent success on the PSP is due to the immense figures brought in by 'Monster Hunter Freedom 2nd' which not only sold more than two million units, but also moved nearly two million PSPs. That's pretty darn good.

With a bigger user base compared to two years ago, PSP gamers are finally taking an interest in Rockman Rockman. But what of Irregular Hunter X?
Posted by Protodude at 1:13 PM